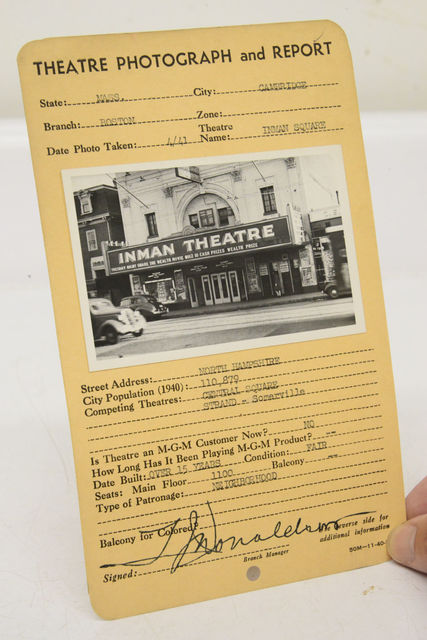 A lost theatre that was located at Inman Square in Cambridge. The inman Square Theatre was opened November 15, 1915. It was still open in 1957. Today a bank and its parking lot occupy the site of the theatre.

The East Cambridge Savings Bank and its parking lot are where the Inman used to be. There are many pictures of it next door at the S$S deli.

This 1916 map shows a building in this location labelled “Inman Square Amusement Co.” I assume this is the theatre. It is in red, near the left side of the map, on the south side of Cambridge Street, a block east of Inman Square.

The MGM Theatre Photograph and Report form lists the Inman Square Theatre on “North Hampshire” street. On the 1916 map posted above, there is a “Hampshire” street running in back of what is believed to be the theatre’s site. There is a photo taken in April 1941. The theater had an impressive fancy facade with an arch above the 3 sets of double doors. There is a shop on either side of the entrance. A huge rectangular marquee spans the entire facade with “Inman Theatre” in mammoth letters on its front. The Report states that the theatre is not showing MGM product, that it’s over 15 years old and in Fair condition, and has 1100 seats. In the photo, there are trolley tracks in the street, so this must be Cambridge St., and not Hampshire Street behind. The theatre name on the front of the marquee omits the “Square” in the name.

This mural, on the S&S Restaurant’s side wall, has a “grand arch shape modeled after the entrance to the Inman Square Theater, which once stood next door.”

I live down the street from its former location, and I walk by the photo of it on the side of the S&S all the time. All ask them if they still have access to the original photo.