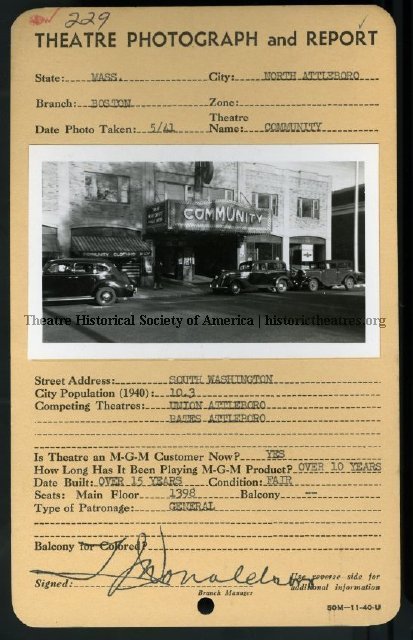 The Community Theatre was opened in 1929. It was still open in 1955, but had closed as a full time movie theatre by 1956. It continued as an occasional movie theatre into the early-1970’s.

I grew up in the Attleboros during the 50’s and 60’s. As a kid and a teen there were only two functioning theaters – the Community in North Attleborough, and the Union in Attleboro.

The Community was the older, larger and more ornate of the two. As I recall there was a lot of ornate detail, a large chandelier, guilded railings and mouldings, a very large balcony, private boxes stage left and right, an orchestra pit, and stage with scenery tower.

I’d guess that the Community was contructed circa 1900 and was in use as a vaudeville theater and for stage productions prior to the advent of movies.

The Community was located on North Washington St. south of the town center – I recall it being faily close to the intersection of Elm St. and N. Washington and near the old high school (now a middle school I think).

By the late 50’s and early 60’s when I had occasion to see a movie at the Community it had definitly seen better times. It was a big theater and they had trouble filling the seates. I’m guessing but I believe it could seat around 1500.

It stopped functioning as a movie house sometime in the late 60’s, but was still used for Town Meeting as it was the largest auditorium in town until the building was sold and converted into office space sometime in the 70’s.

I do not know if the building still stands.

Listed in the Film Daily Yearbook,1943 as being operated by Paramount Pictures Inc. through their subsidiary Mullins and Pinanski.

The MGM Theatre Photograph and Report form for the Community Theatre in North Attleboro has an exterior photo dated May 1941. The entrance was in the center of a 2-story business block. There was a rectangular marquee with “ComMUnity” in big letters on the front, and what appears to be a vertical blade sign above. There was a center boxoffice under the marquee. To the left was Community Clothing store. The Report says that the theatre is on “South Washington Street” (incorrect), that the competing theatres are the Union and the Bates; that the Community has been showing MGM product for over 10 years; that it’s over 15 years old and in Fair condition, and has 1,398 seats.

In the early 1970’s me and a friend opened the Community Theater once again. We scrubbed the entire house floor, re-painted all the seat backs, and lowered and cleaned the 4 wrought-iron, gold leafed chandeliers, and replaced all the bulbs with new clear glass ones so the filaments would sparkle brightly on the ceiling.
Originally there were also 2 crystal chandeliers, but when they left is unknown to me. Of my earliest memory these were not in place, but replaced by two ordinary single spot lights.
At that time (the 70’s) there was still an identical theater in the Boston area, an exact duplicate of the Community, that still had all 6 chandeliers.
The water-cooled Simplex projectors were still in use. All the power to run the theater was generated on site by an enormous vintage DC generator housed in a separate room off to one side of the projection booth. The booth was accessed by climbing up a steep iron ladder, and we hoisted the steel film-boxes up there using a block and tackle.
Unfortunately the fabulous 4 manual Wurlitzer pipe organ had been sold off in the 60’s, though I recall playing it often when I was younger. It had all the bells and whistles one might expect from an organ designed for a vaudeville house.
The fire curtain had a large painting of what might be a southern-style mansion. The stage curtains were brilliant gold with wide turqoise borders, and it looked great when it was lit. The walls and ceiling were painted a warm gold/tan, seat back maroon, and plenty of gold leaf throughout the theater. Stair cases going down on either side from the lobby were white marble, leading to the coat rooms and rest rooms.
The theater floor had a steep rake to it, and contrary to the post above, there was no balcony nor box seats. (the Union in Attleboro had a balcony).
We began by running vintage B&W movies such as Mae West or WC Fields hoping to attract a crowd. We also sold cheap refreshments. Barely making a profit we started running concerts and booked the Kinks, and Seals & Crofts. Shortly thereafter we closed again.
After that the interior was filled up with office space built quite badly. You could still look out service doors and see the interior walls of the theater.
The theater was demolished in the 80’s.
Bob Cloutier

My memory from junior high school, when I used to get into the Community to play the organ reveals NOW that indeed it was only a 2 manual Wurlitzer organ. Installed in 1929 and sold in 1968 and moved to Seekonk. It now has a new owner, and is still in existence.
bob cloutier

UPDATE: This theatre was still showing films, perhaps on and off, until the early 1970’s, per newspaper ads found.