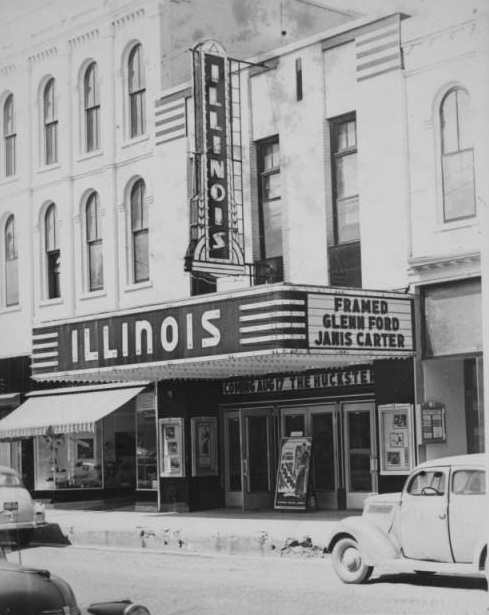 Unfortunately, Kerasotes has closed the Illinois Theatre in Macomb.

A little history about the Illniois Theatre. Due to the rising popularitly of movies, Chandler’s Hall in the upper floor of the Opera House Building on the NW corner of the Macomb, Illinois quare, became the Chandler Theatre in 1912. In 1918, soft drink bottler Harry Elwell and local lawyer Andrew L. Haniline bought it, redecorated and refurnished it, and renamed it the Illinois Theatre. A Douglas Fairbanks movie His Majesty the American, was the first film shown upon reopening in 1919. As a promotion to bring in new customers, Hainline and Elwell were able to arrannge the local filming of a comedy short Macomb Adopts a Baby, which premeired in late October. By year’s end, Elwell sold his interest on Hainline.<br>

Following a New Year’s Day fire in 1925, Hainline completely remodeled the Illinois and moved it downstairs and installed a sound system. With a lighted dome in the ceiling and seating for 800, it became Macomb’s preeminent movie house for decades. In 1935, Hainline once again remodeled the Illinois to manintain his competitive edge. The exterior was redone with a contemporary neon marque and glass doors. The interior featured a new lobby, lounge and balcony, as well as new seating and decorative accents. Hainline would own the Illinois Theatre as well as the Lamoine Theatre (which he purchaed in 1936, many years later known as The Lark), until his death in 1942.<br>

Lost Memory—that’s it! Steve, thanks for the memories! As a lifelong resident of Macomb, I truly miss the Illinois Theatre. I remember when there was a concession stand between the restrooms, far beyond the main entrance. Also, the old ladies room was a long hallway that slanted down and curved to the west. That’s back when it was only one theatre. I love this town, and I love reading the history of the Illinois. I’ve only been to the old Illinois twice since it’s now the Forum, but I believe the dome is still covered. The Forum has done a total transformation and the movie balcony is now gone (boo), but there’s a ¾ balcony and it’s still a nice place. Thanks!

Does anyone have pics of the Lark Theatre in Macomb? I would love to have copies if you do. ~Terri

I made it up to Macomb for Christmas this year and got a couple pics of the old Illinois Theater, now known as The Forum. Here’s a photo. Though I was unable to make it inside due to nothing going on there during my brief visit, I did talk to a couple people who have been, and when I asked about the dome their reply was “What dome?” I guess that covers that question.

Seems I can’t leave this alone…

I’ve put together a flickr page with as many photos of the Illinois Theater as I could find on the web.

I’ll update it if I come across more…