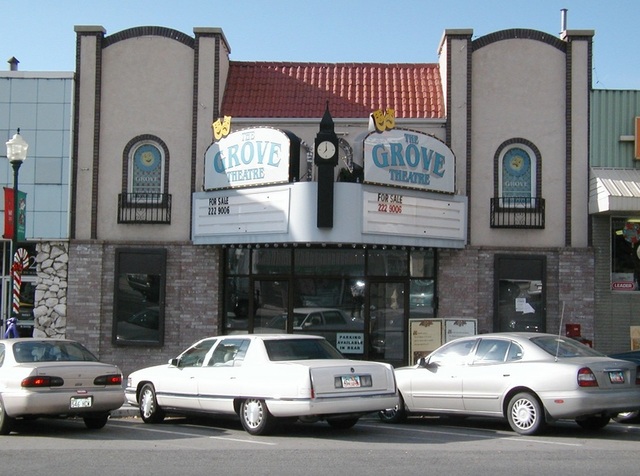 On August 4, 1997, owner Sharee Young put the Alhambra Theatre up for sale for $250,000. After operating the discount theatre six days a week for six years, Young said it was time to move on to other projects. “This is one I’m tired of. It’s a baby-sitting job. It’s fun, but it’s hard work, a lot of hard work.” Attendance at the Alhambra Theatre dropped a little during 1997, which Young attributed to a poor selection family movies.(3)

In December 1997, the Alhambra Theatre closed temporarily because of a lack of family-quality movies. Owners Jim and Sharee Young expressed concern about the dwindling selection of wholesome movies, while the number of PG-13 and R-rated movies increased.(4)

New owners Suzanne and Bill Kirby remodeled office space at the back of theatre to create a kitchen and bakery “so we can serve a nice meal with chandeliers and china.”(5) The stage, which was hidden behind the movie screen, was uncovered and rebuilt. The raked floor in the auditorium was replaced with a new concrete floor with tiers and the seating was reconfigured to seat 180 patrons around tables.(6)

The Little London Dinner Theatre presented eight or nine shows a year, each bringing in better numbers than the one before. The theatre was sold out for the run of “A Christmas Carol” in December 2001. Despite it success, the Little London closed in January 2002 because it could not overcome the the costs “paying actors, royalties, and all of the associated costs of providing a choice of hot dinners within the price of the ticket.”(2)

The theater was later purchased by Gayliene Omary and Jan Shelton and renamed the Grove Theatre.

The owners of the Grove Theatre were told to cancel the scheduled run of the the Broadway hit “Rumors” if the actors planned to not utter obscenities in the script written by Niel Simon. The cast, crew and sets were ready to go and the theatre had paid an $800 royalty to produce the play, but when they tried to get permission to omit the obscenities, Neil Simon insisted “that there be absolutely no deviation from the script as written”. Gayliene Omary and Jan Shelton bought the theatre from the former owner of the Little London Theatre. “Rumors” would have been the theater’s second production.(7)