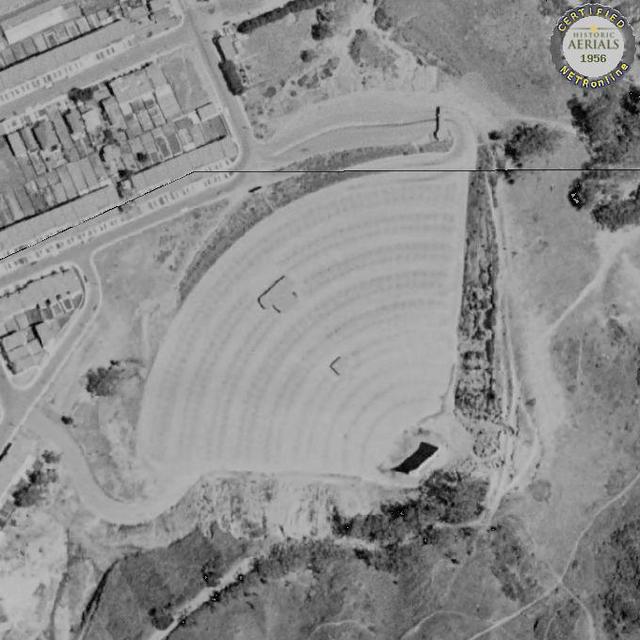 The Mission Drive-In opened May 2, 1951 with Doris Day in “Lullaby of Broadway” & Richard Denning in “Insurance Investigator”. It was located at the end of Guttenburg Street, near Bellevue Avenue. I saw “Escape from Witch Mountain” here. It was closed in 1976. Condominiums have been built on the site.

Syufy operated this drive-in and I believe it was either two or three screens from the early 1970’s until close.

Located at 500 Guttenburg st, this Drive-in closed in 1978 to make way for a housing development.

This was never more than 1 screen. I went to this when i was a child.

I also worked for Century Theatres around the time this closed. They did not own or lease the theatre. They owned the Geneva on Carter.

According to Jack Tillmany’s book “Theatres of San Francisco,” p. 88: “The Mission Drive-in’s official address was 5500 Mission Street, but that was only its mailing address, in order to give it a San Francisco identity…the site was atop Guttenburg Street in Daly City.”

Tillmany indicates the theater opened in 1951 and closed in 1976. It only had one screen; it was the Geneva that eventually had three screens. I will leave it to the moderators to determine which address should be used and how to deal with what is otherwise this duplicate entry.

This opened on May 2nd, 1951. Grand opening ad in the photo section.

The exit ramp may still be there

The February 14, 1951 issue of The Exhibitor said that the Trans-Calfiornia Theatre Company’s new Mission Drive-In,under construction just outside San Francisco, had been designed by architect Bernard Nobler.

Mission Hills Drive runs through the centre of where the ramps were and part of it does appear to be the exit road which is gated off from Mar Vista Drive.

Motion Picture Herald, March 15, 1952: “The 1,000-car Mission Drive-In, formerly owned by Trans-California, has been purchased and will be operated by Howell Bros. of Los Angeles.”