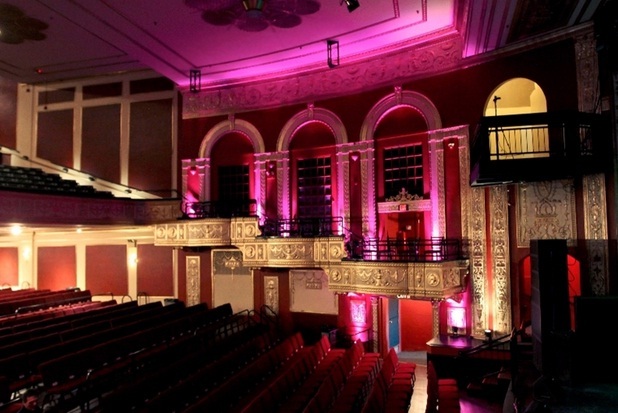 The Macomb Theatre opened on July 25, 1921 as a vaudeville/movie theatre presenting the musical farce “Pretty Baby” on stage and the movie “Scrap Iron” starring Charles Ray. It was designed by architect C. Howard Crane with Elmer George Kiehler as associate architect. It went over to full-time movies in the 1930’s. The theatre closed in the 1980’s.

The theatre then hosted live productions under the name Great Lakes Dinner Theater which operated until 1987.

The theatre became part of the Emerald Theatre Complex. The theatre hosted concerts, comedy shows, corporate events, and seminars. It was closed in late-2015 and was ‘For Sale’. It had reopened by August 2018.

Another photo of the Emerald:
http://www.flickr.com/photos/detroitsky/514119383/

Here is the Macomb undergoing renovation in 1982:
http://tinyurl.com/cleptg

Status should be closed. Pending sale in Feb 2016 to new owners.

A theatre to rival the movie showplaces of Detroit came to Mount Clemens in 1921, and she was a grand lady indeed. The Macomb Theatre was the brainchild of Frank J. Kendrick of Mount Clemens, who, along with several other local men, saw the need in Mount Clemens for a theatre in addition to the Bijou. The men formed the Macomb Theatre Company with Frank Kendrick as president, Harry M. Widrig as resident manager, and Louis F.

Wolf, William E. Koehler, William Wagner, Jacob Malbin and John Guenther as board members. The companys original intent was to create an additional movie venue in downtown Mount Clemens, with more capacity than the 700-seat Bijou. A site on Walnut street was acquired and plans for a 1,000-seat movie palace were undertaken.

Unsatisfied with the work of a local architect, the company turned to C. Howard Crane of Detroit, the designer of Detroits Orchestra Hall and Radio City Music Hall in New York. Crane and his associates convinced the company to provide a stage for vaudeville acts, and the design of the theatre changed accordingly. The new theatre would seat 1,035 on the main floor and an additional 600 in the balcony.

The stage area was equipped with fly galleries for scenery, dressing rooms for performers, and spot and flood lights of the latest design. A massive Hillgren & Lane pipe organ was specially manufactured for the Macomb Theatre. Local contractors for the construction were Schott Bros. and Weber of Mount Clemens.

The cost of construction was $300,000, with an additional $60,000 spent on furnishings. Decorating was done by Max Goldberg of Detroit, and the Daily Leader marveled at the splendid appointments of the house: Massive pilasters resplendent with rich colorings, and ornate designs, and with bronze caps, support a well-proportioned entablature, on which rests the arched ceiling. Gold pilasters enrich the sides of the theater, the entire color scheme being in blue, green, gold and grey. The ceiling is paneled with plaster relief work and mural paintings by a renowned decorative artist and are inserted in the plaques.

The newspaper further noted that the main curtain was of deep blue silk velour with a huge letter M in gold at the bottom. The Macombs stage was devoted primarily to vaudeville acts at first, but motion pictures and road attractions were also regular features. The opening act on July 25, 1921, was the Jimmie Hodges Musical Comedy Company offering the musical farce Pretty Baby. The movie attraction was Charles Ray in Scrap Iron.

Mount Clemens turned out in great numbers and filled every one of the 1,635 seats for the theatres premiere performance. The Macomb continued to offer vaudeville and road shows well into the 1930s, and in the face of the decline of live theatre became a successful first-run movie house. The theatre was briefly closed in 1953, then was purchased by former usher Robert Vickrey, who operated it as a movie theatre catering to the interests of teenagers for almost three decades. In June, 1980, beset by youthful vandals and stiff competition from multi-screen movie complexes at Lakeside and Macomb Malls, the Macomb rang down its final curtain as a movie house after running its last picture, Kramer vs.

Kramer. An attempt to return the Macomb to its former glory was made when the Macomb Council for the Performing Arts purchased the building in 1981 and restored it for use as a live theatre. The Council was recognized by the federal government for funding the restoration with local donations. Godspell was the inaugural performance at the rejuvenated Macomb Theatre, but its troubles were far from over.

The theatre was closed in June 1984 to restructure its debt, and the Council was forced to offer it for sale in October 1984. Another live theatre project was undertaken in 1987 when the building became the Great Lakes Dinner Playhouse, but that venture folded after only a year. In 1991, new owners of the building converted the once-grand Macomb Theatre to the Club Hollywood nightclub, and in 1997 the nightclubs name was changed to JDs Macomb Theater. The year 2000 saw the buildings restoration and reopening as the Emerald Theatre