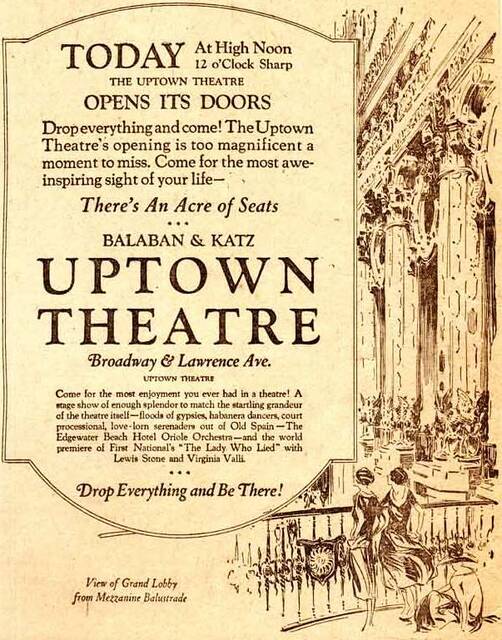 The Uptown Theatre opened its doors August 18, 1925, billed as “An Acre of Seats in a Magic City.” The Grand Opening of the Uptown Theatre was accompanied by a “Central Uptown Parade” of over 200 floats and a grand ball at Harmon’s Arcadia in Uptown. Over 12,000 people stood in line to be ticket-holders in the very first audience. Several women collapsed because of exhaustion.

The theater opened with a staff of more than 130 people, including a full-time 34 piece orchestra, a nurse, firemen and others. Elaborate stage show productions would accompany each movie, unique in that the elaborate stage shows would follow the theme of the movie. Other chains had basic Vaudeville acts to keep patrons entertained before the movie. The Uptown Theatre is on several landmark and historic registers.

A half century of movies

Uptown Theatre circa 1980 Movies at the Uptown Theatre continued, even after stage shows ended as a way to reduce costs. In 1949, the stage shows were revived for a short time. Movies continued during the 1950s and 1960s. Notably, during that time, the television show Queen for a Day was filmed in the Uptown, with a live audience.

Movie crowds eventually dwindled, at the same time that the Uptown area was experiencing a decline of retail in the late 1960s and early 1970s.