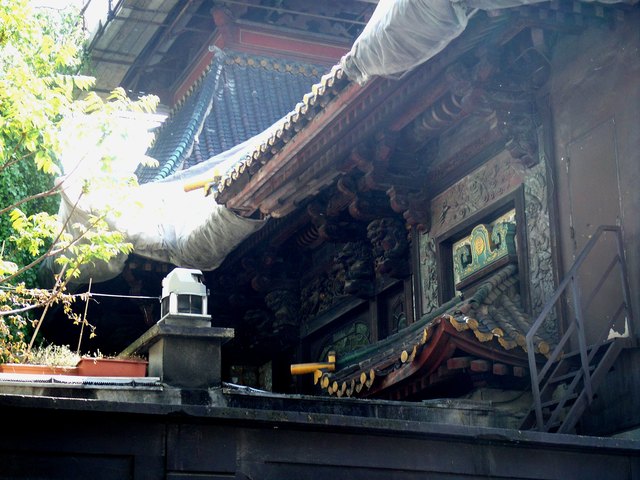 Located in the southwest of the city centre. Certainly one of the original monuments to see in Paris, La Pagode was erected in October 1896 to the designs of architect Alexandre Marcel. It was built by a Mr. M. Morin, the manager of the department store Bon March, as a wedding present for his wife on the land next to their house. A real pagoda (some features imported from Japan) in a lavish Japanese style, it was used as a ballroom. But they quickly divorced and the pagoda was hired for events.

It was converted into the Pagode, a 400-seat cinema opening on 31st March 1931 with Jose Crespo in “En cada puerto un amor” (One Mad Kiss) presented in its Spanish version. A projection booth was built at the rear side of the building and beautiful glass windows on the side-walls were darkened by simple wood panels. An additional building constructed on a part of the garden was used as the lobby.

In the 1950’s and 1960’s, La Pagode was a simple district movie house showing second run movies. Every Thursday, I remember the children’s matinee with Laurel and Hardy movies and cartoons.

At the beginning of the 1970’s, it was turned to an art movie theatre but this lovely design inside and outside is very old fashioned with a dusty smell.

But what future for this cinema at the beginning of the multiplex era and lost in a very quiet district? The answer came from an independent French film producer who in 1973 built a new 180-seat screen in the basement. The high wall of the garden was part demolished to be replaced by metal railings in order for the building and the garden to be seen from the street, and a new modern lobby was erected.

With a clever first run art movie programming and a brilliant restoration of the main auditorium, which now seats 212, the result was a huge success.

In the 1990’s the difficulty to run two screens was a major problem. Gaumont, who had operated the Pagode since 1979 decided to quit, and a new owner of the building intended to open a restaurant, but the Ministry of Culture decided to upgrade the Landmark status of the building together with its garden, with the obligation for it to remain a cinema.

After two years dark again La Pagode reopened, the exterior towers of the roof are covered with plastic sheets to avoid leaks and scaffolding was erected in the main auditorium to hold the highly decorative ceiling which is covered with plastic sheeting. Major works of renovation are needed but the future is more secure and I hope this renovation will be possible. This is one of the more interesting movie theatres in Paris.

Sadly a dispute between the owners of the building and the operator of the cinema Etoile Cinemas arose over unpaid rent and repairs, which was brought to a head in October 2015 after a previous court hearing sided with the building owner and an appeal against this ruling was not granted. The Pagode closed on 10th November 2015 with Michael Caine and Harvey Keitel in “Youth” playing in Screen 2 and the French film “Marguerite” playing in the main Japanese style auditorium.

In March 2019 plans were announced to renovate and reopen the Pagode. Charles Cohen, a wealthy American investor from New York will fund the 8 million Euros full restoration/renovation which will be completed in three years. A third screen located in the basement is to be added. Unfortunately, the high expectations for renovations were brought to the a halt when work began on the landmark listed garden on 18th May 2020. Contractors working on the site illegally destroyed trees which were over 100 years old and other precious plants, causing a public uproar.

The seating capacity in the original auditorium is 211. As stated in the opening text above, the newer basement screen seats 180.

I always thought it was an actual Shinto temple because any advertisement of what it was was very low key. It is certainly an oddball as far as its neighbors are concerned, but it does not stand out. You have to look for it.

Warren’s links are dead, but I’ve found this weblog post which begins with four photos of La Pagode and its garden.

This web page has photos of theaters around the world taken from the book Architectures de Cinémas, by Francis Lacloche, and includes a more expansive view of the auditorium of La Pagode (found a bit less than halfway down the page.)

This web page has a general view of the theater’s unobtrusive entrance. Clicking the “view all images” link reveals only one more photo, depicting the garden.

Also, this article about Paris cinemas from The Guardian begins with an evocative nocturnal photo of La Pagode’s vertical sign.