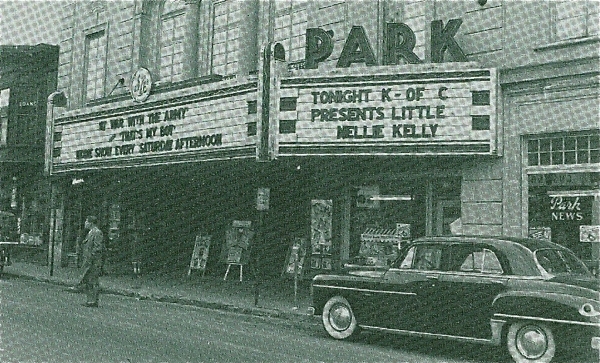 A lost movie theatre in Taunton, Massachusetts. The Park Theatre was opened by 1927 and was located on Broadway, next door to the Strand Theatre. It was closed in April 1964.

I remember this theater having 2 balconies it was an amazing place for a kid in the late 50’s early 60’s…. I saw Doris Day in Jumbo there and the screen had a little blue patch on it !!! It was demolished in the early 70’s along with the Strand next door.. I was able to get in and look around a bit…the whole back ( screen ) area was already gone but we couls sit in seats in the 2nd balcony and imagine again . Found some press sheets or giveaways as they were called for Children of the damned reckon that was the last film to be shown. Would LOVE to hear from anybody with memories of this great theater and pictures!!!!

anyway I could get online file of this film review of 1936?

Closes Park Theatre in Taunton, Mass.
TAUNTON, MASS. —– The Park Theatre has been closed, leaving the Strand as the town’s only operating motion picture theatre. Richard Bentley, attorney for the Park, ascribed its closing to “competition” and “lack of patronage.”

The theatre is owned by Mrs. Bentley, Mrs. Margaret Lawson and Mrs. Rosemary O'Neill, who have put it up for sale. The Park has a seating capacity of 1,600 and is known for having one of the largest stages in New England.

Could you possibly send me article??? Marty

No, I don’t have it. And Boxoffice doesn’t seem to be available online any more. That’s where I read it. Anyway, I think I quoted the whole piece! It was a small item, not an article.

The Park in Taunton is listed in the 1927 Film Daily Yearbook as having 1200 seats and open daily.

The New Court House sits on the sites of the Park and Strand now.

In the 1942-43 Motion Picture Almanac, the Park is listed under Paramount Theatres – Mullin & Pinanski circuit. The Strand in Taunton was also a M&P house at that time.