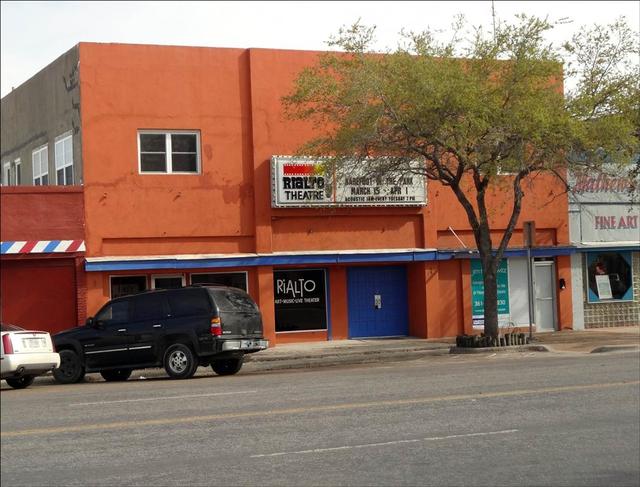 The Rialto Theatre was built in 1937 by Hall Industries Theaters, a company that owned and operated several theatres in the South Texas region at that time. Owned by H. W. Hall, the company was headquartered in Beeville, Texas.

The grand opening was on November 5, 1937. The original theatre seated 460 people in “air-conditioned comfort”, which on the Texas coast at that time was extremely rare. Upholstered seating and an elevated incline, permitting an unobstructed view of the screen, were also offered to theatre patrons and much publicized.

The first manager was Wallace Witt. He lived in the apartment adjoining the projection room on the second floor.

The Rialto Theatre operated until the early-1980’s when the doors closed for good. February, 2004 brought a change in ownership. The long-neglected building was renovated. It’s returning to its roots as a community forum for the arts. Contemporary visual and performing artists now walk its stage. The building also houses art galleries, working studios and a performing arts space seating approximately 100 people.

I didn’t know this theater was still around. I believe I own the original projector from this theater.
Dan

I was fortunate to attend a meeting held in this theater last week. It has been lovingly restored by the new owners and is now home to an art gallery as well as live theater and musical fests.