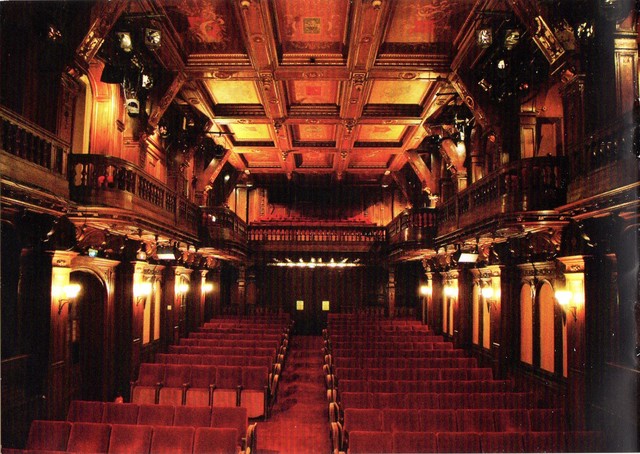 In 1898, Louis Mores one of the pioneers of the motor car builders who was also a rich businessman, built a theatre in the garden of his residence in Paris. The Belgian architect Alban Chambon designed the building in a Baroque style. Each year Louis Mores would improve the building, adding a balcony and wings. When he died in the 1930’s, the house was razed but the theatre remained while buildings were erected all around.

The theatre became a cinema in 1931, and had a projection box built at the rear of the stage, allowing for rear projection. There was a large lobby on two levels and a big atelier under the roof. The stalls lobby could become a dance room with a wooden floor under a huge carpet which could be removed for the occasion.

During the 1950’s, the owner was a cinema lover and the Ranelagh Cinema was a very famous art cinema of the city. Everything was done to give the best for movie-goers. For instance, for an opera movie the sound system was settled in the orchestra pit.

In the 1970’s, as with other similar movie theatres in Paris, the times were difficult but the theatre had a successful run of the classic French film “Les Enfants du Paradis”. The Ranelagh Cinema was the perfect box for this jewel and people came for years from the entire world. It became a Listed Landmark building in 1977. It was a full time cinema until 1995 and is especially known for its regular screenings over many years of the French classic film “Les Enfants du Paradis”.

Some live performances started to alternate with movies. Every year, the puppets of Salzburg filled the theatre with a faithful audience.

The Theatre Ranelagh is now a permanent live theatre of the city, although it still presents occasional Classic movies (via DVD projection). It is hidden away in a small street in the 16th district, but it deserves a glance. Not far away is the tower building of Radio France.