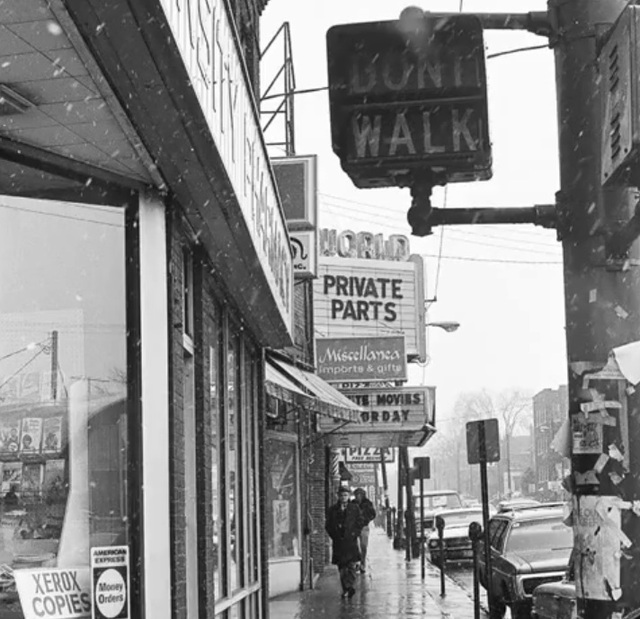 I have just discovered an original poster signed by TOM CASEY which reads as follows: “ ‘Ma’ home ain’t here, babe'/Chicago Blues/Musicians and other/Drawings by/Tom Casey/April 3-30 [no year given]/Lobby of the World/theater, 2150 17` High/Street, Columbus, Ohio”. On the back in large cursive is my name. (I’m thinking of framing it as it is a handsome piece.) Memory of how it came to me is gone, but I can date it between 1954 & 1967, the years I lived in Columbus and taught at OSU. Possibly it was given me by one of my students. Possibly it was given me by one of my students. Possibly TC was at student at OSU. I have been unable to locate this Tom Casey on the Internet, so would appreciate getting information from onyone who can shed light on Casey or on the use of the World theatre lobby as an art gallery for who-know-who to exhibit their works or who can offer any other kind of related information.

Whoa – BW3 moved into the space?

So conflicted – I used to love Tuesday night 15 cent wings at BW3 in college, but the thought of them now occupying where I went to so many movies my freshman year…

World Theater opened as a neighborhood theater called The Alhambra back in 1913. It was a movie theater continuously for the next 75 years.

In 1947, it changed its name to The World and began showing foreign films. The World fought the good fight for freedom of speech in a couple actions taken against it by the Columbus Film Review Board in the 1960s.

The building was a gym and then a succession of nightclubs. It’s currently (7/2009) empty and for lease.

I wrote an article about the theater that at: http://www.indianolapark.com/alhambra.html

I lived in the apartment complex right across High Street from what was the Alhambra/World/Roxy for 6 months. “The Nuthouse” didn’t strike me as once being a theatre, now that I see DAKCMH’s post and everyone else’s comments it makes perfect sense.

The WORLD theatre actually opened in 1947 in the building that housed the Olentangy at 2523 North High Street. On 9/14/1949, the WORLD moved to the Alhambra building, and the Olentangy became known as the Little Theatre, playing classic films.

Did the ‘Little Theatre’ eventually become the X-rated ‘Little Art Theatre’ ? It is not yet listed here at CinemaTreasures.

The Little Theatre did become the Little Art Theatre. The local police tried many times to shut that down. Many films were confiscated and managers arrested. Film censorship was a huge issue well up into the 1970’s. Building was finally condemned and torn down.

Thanks. Can you add it to CinemaTreasures? I remember that they used to advertise regularly in the Dispatch and Citizen-Journal along with their sister theatre, the ‘New Paris’ on Parsons Ave.

I added a page here for the Little Art Theatre.