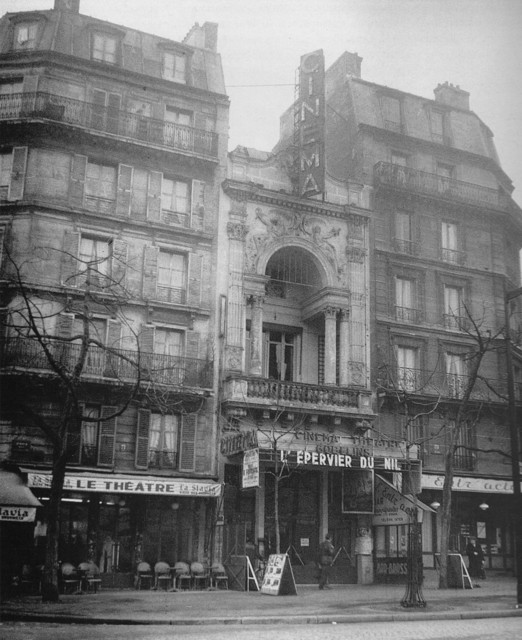 Located in the south of the city centre. The Theatre des Gobelins was opened in 1869 and belonged to a show business family part of a theatre chain. Only two of these theatres are still live theatres of Paris (Montparnasse and the former Batignolles, now Hebertot).

The front façade is very narrow and was sculptured by artiste Auguste Rodin. The auditorium is what is called in French “theatre a l'italienne' with two balconies. The theatre was converted into an 800-seat cinema in the early-1920’s and was known as the Cinema Theatre des Gobelins, and later the Fauvettes.

The theatre lost his elegant design during the 1960’s. By that time it was a filthy place but new owners renovated the building and constructed their flat in the balcony lobby.

Around 1975 a huge refurbishing for the creation of two screens was done, the screen one in a circle shape and stadium seating (unusual at that time) was very comfortable with 240 seats, and screen two on the ground floor level seating 495.

The independant owner sold to the Gaumont France chain in the 1990’s and renamed the theatre the Gaumont Italie. That chain was running most of the screens (10) of that district of Paris such as the Gaumont Grand Ecran, a wide screen movie theatre which opened in 1992. It was last re-named Gaumont Gobelins, and served as screens 6 and 7 to the nearby 5-screen Gaumont Gobelins.

But the profit of this theatre was decreasing and Gaumont France closed the former Theatre des Gobelins in November 2003. The facade has been landmarked. In 2009, the façade was saved, but the interior of the building had been gutted.

In 2014 the Fondation Jerome Seydoux-Pathe was opened on the site (which has its own page on Cinema Treasures).

A section of the Gaumont Gobelins can be seen in the background of this April 2008 photograph:
http://www.flickr.com/photos/tofz4u/2494498033/