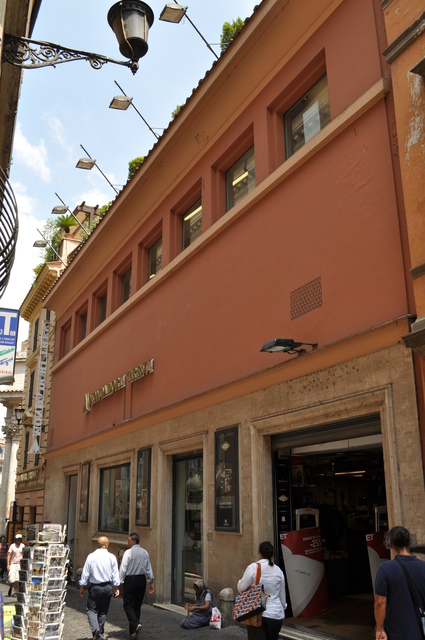 The Cinema Sala Trevi is a cinema in the centre of Rome, a few steps from the famed Trevi Fountain, and part of the Cineteca Nazionale Alberto Sordi. Named in honor of the late Roman actor Alberto Sordi, who died in 2003, the programming here presents Italian movies of the past and present, borrowing from the holdings of the National Film Archive with which the theatre is associated. They also show new works of Italian directors and a selection of films and film series imported from other countries.

The state-of-the-art screening facility and the library and research facilities opened in 2003 and were incorporated into the building that housed the former long-dormant Cinema Trevi which had its entrance at via di San Vincenzo 6-10, and had seating on three levels. It is now gutted and in use as a Mondadori bookstore and retail outlet. Much of the current cinema facility exists at subterranean levels, its interior incorporates views of the inevitable archeological ruins uncovered during re-construction.

The place can be described as the equivalent of the Mary Pickford Theatre at the Library of Congress or the American Film Institute Theatre. It is a vital addition to a city that, unlike Paris, never boasted any real cinematheque with regular screenings.

Yes, back toward the fountain, with the baroque-faÃ§ade church of Santi Vincenzo e Anastasio on your left walk toward the rear of the Quirinale, not toward the via Tritone. Maps list the street as being Via San Vincenzo. If you were to continue walking, you would end up at via IV Novembre. The Vicolo del Puttarello address comes from the newspaper listing in Il Messagero and their website and according to this online article on Trevi district streets, it seems to be a tiny street that runs off Via San Vincenzo.
View link

Many, many thanks, Gerald — Your info about this theater is valuable, because the programming seems terrific. The via San Vicenzo is indeed the major touristic feed from the Quirinale, and the vicolo Scanderbeg runs off it with prominent tourist attractions (as your attachment points out)—I don’t know how we missed the Puttarello (perhaps we were distracted by a quirky “Museo di prodotto artigianiale di pasta” on the Scanderbeg). In the opposite direction (toward the via Tritone) is the teatro Vittorio Gassman, on a street off the left named via delle Vergini. It hosts travelling groups — currently “King Lear,” to be followed by Natalia Ginzburg’s debut play, “Ti ho sposato per allegria” ‘I Married You for a Good Time,’ and then by Eduardo De Filipo’s “Non ti pago” ‘I’m Not Paying You.’ Elsewhere, the Filmstudio was showing the five “Creamaster Cycle” films ‘round the clock on two screens (!), while the Azzurro Scipioni was screening “Bowling for Columbine” upstairs, and a Wim Wenders festival downstairs. Quite a feast, largely unavailable at most North American outposts.

Boxoffice Bill, Thanks…
I know Ginzburg’s play “Ti ho sposato…” from the book and from the film version. I have De Filippo’s 1942 film version of “Non ti pago!” with the whole De Filippo family…utterly hilarious. When I first saw it at MoMA in New York, the audience was in stitches. Do you know the Teatro Rossini…near the Pantheon? I remember seeing a Roman dialect play, “L'avaro” there in 2000. I did an entry on this website on the Azzurro Scipioni, an idiosyncratic but indispensable cinema. It’s practically in the Pope’s backyard. He should go there. Perhaps you should add your comments there as well.

Gerald— I’ve seen neither “Ti ho sposato” nor “Non ti pago,” though I know that the film version of the former has played on RAI (with Monica Vitti in one of the in-law roles!). The family cast of “Non ti pago” would add to the play’s Hamletic -fremito d'orrore-: did De Filippo’s father act as the hero’s father? The only screen performance of De Filippo that I’ve seen is in “L'Oro di Napoli.” I imagine “Fortunella” is available on tape? I’d like to see the original film-version of “Filumena” and compare it with De Sica’s remake in a back-to-back viewing. I know the teatro Rossini, but can’t recall seeing anything there. The pope should see “Christ Stopped at Eboli” at the Azzurro Scipioni, no? Ars longa, but vita has to move forward.

Newspaper ads don’t refer to the theatre any more as the Sala Trevi Alberto Sordi, but simply as Sala Trevi, perhaps to avoid confusing folks who might think the place is located in the Galleria Alberto Sordi, the nearby 19th Century galleria/mall formerly called the Galleria Colonna. The former Cinema Trevi is actually occcupied by the Mondadori Trevi bookstore. The Sala Trevi Cinema is below ground, to the rear of the former Cinema Trevi, amid rediscovered ruins (you can see them from the cinema before the show begins, when a curtain closes on them.) The fact that the entrance to the cinema is from an obscure rear alley means that there are never any passers-by as with the bookstore which is practically adjacent to the busy Fountain of Trevi.

Ahh! No wonder I didn’t find it last Fall: the entrance looks unprepossessing, and vicolo is tucked away. Thanks for the photo ID.

Bill,
Yes, and I presume others can’t find it either. I recently went to see “Amore in cittÃ ” here during my trip to Rome, and I was the only person in the audience! At another film there were about twenty. The entrance never should have been put on that back street but rather on the main street where the Mondadori Bookstore is and where the entrance to the original Cinema Trevi was. A million people a day probably walk down that street! They do, however, publish a nice descriptive calendar and are listed in the papers. They must attract a good faithful little audience for many of their shows.

I understand the theatre has recently closed and the Cineteca Nazionale is to resume its screenings at a different location in the city.