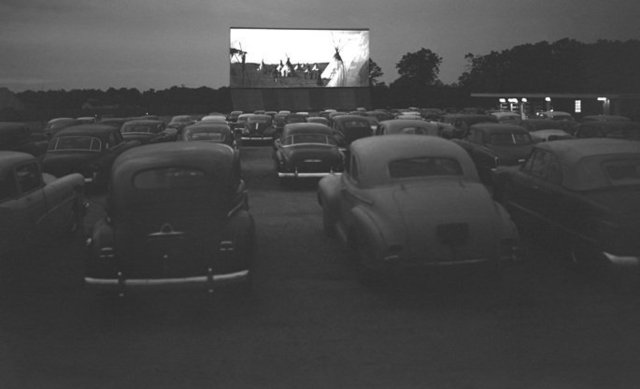 It was later renamed Whitestone Drive-In and was twinned in 1978. A third screen was later added and the car capacity was increased to 1,200. It was closed on December 2, 1982. It was demolished and the Whitestone Multiplex Cinemas were built on the site and opened on October 28, 1983. It was closed in 2013 and has its own page on Cinema Treasures.

The picture on the screen looks superimposed.

Yes, the picture on the screen DOES look superimposed — but the lot is full of cars, which leads me to wonder if the entire thing was staged.

42nd Street,couple of those Double features were great.Those were the days.

“TRUE GRIT” and “THE LAWYER” what Double feature.Wonder about bookers at Drive-ins.They justed slapped stuff together it seems to me.

Aerial photos and grand opening ads uploaded in the photo section for this drive-in.

Here is the Whitestone Drive in I hve…with all the cars lined up and the speakers….

I use to go there as a child. What happens is that the movies would start at dusk and there would still be a little bit of daylight left. They would show two features. They also had two screens so you would have a chose of movies. It was hard leaving the theater because there was always a traffic jam after the last movie. They even had a playground for the kids to play on.

You’re so right about the odd bookings, Mike. As a 9-year old at the Whitestone, I recall a double-bill of Butch Cassidy & The Sundance Kid playing along with The Prime Of Miss Jean Brodie. Also saw Steve McQueen in The Reivers, sort of a modern, comedic western along with The Go-Between, which was an English romance film.

Please update, theatre closed December 2, 1982 with Horror Planet, Creep Show, Hands of Lighting and Alone in The Dark. It was a twin as Blue and Red, never 3 screens. The Multiplex open October 28, 1983. A better improved grand opening ad in photos section and the name of the twins in the photos section.