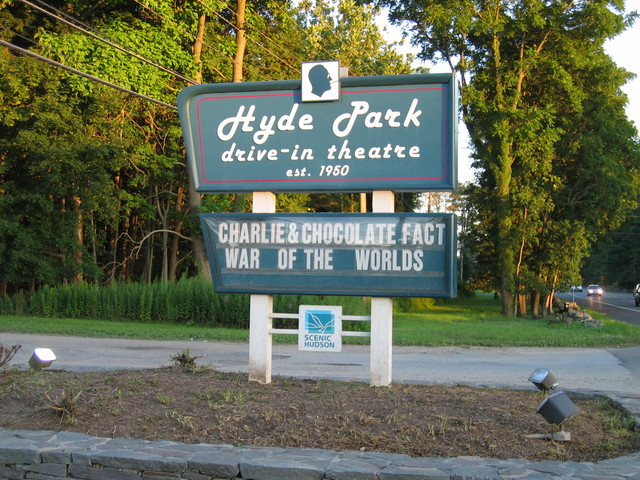 Opened on July 28, 1950 as the Hyde Park Auto-Vision Theatre with Joan Fontaine in “You Gotta Stay Happy” & Ann Blythe in “Red Canyon”. Later renamed Hyde Park Drive-In, it has been a local haunt for decades and, at $6 per person, the drive-in is a cheap alternative to the local multiplex.

In 2000, the theatre was sold to Scenic Hudson Inc., a Poughkeepsie-based environmental group. While the previous owner is still running the drive-in, no one knows what will happen to the Hyde Park Drive-In.

Many local residents were concerned that the Hyde Park Drive-In may close after the summer of 2001. So far, the current owners have refused comment on their plans and movies continue.

Mentioned in the NYTimes CT Section about the last drive-ins in Connecticut.

The Overlook Drive In Will be open until mid Oct

The Hyde Park Drive-In and the Overlook Drive-In have both converted to Barco digital projection.

Yeah thanks Chris1982. Now someone needs to reopen the Fair Oaks it already has the digital projection.

Apparently Scenic Hudson did not want a Wal-Mart or something along those lines going in across the street from the FDR homestead, so they bought the land under the DI and leased it back to the owners.

The Observer of Red Hook printed a nice history of the Hyde Park in Sept. 2014. It included a copy of the July 28, 1950 Grand Opening ad for the Hyde Park Auto Vision Theatre. The article said it was opened by Sidney Cohen and has been in the family ever since.

The Poughkeepsie Journal’s history (printed Aug. 3, 2011) added that Cohen’s brother-in-law Phil Eisenberg also helped establish the drive-in. “In 1977, we won county rights to show ‘Star Wars’ and it became one our biggest successes,” Fred Cohen recalled. “We ran it for 32 weeks and it grossed as much the first week it showed than we made our entire first year in business.”

The 1952-56 Theatre Catalogs listed it as the Auto-Vision, owners P. Eisenberg and S. F. Cohen.

Its listing in the 1951-52 International Motion Picture Almanac called it the “Hyde Park Auto Vision”, capacity 480, owners P. Eisenberg and S. F. Cohen. It stayed that way through the 1966 edition. The IMPA changed the listing to just “Hyde Park” by the 1969 edition. The 1978-88 IMPAs listed only S. F. Cohen as the owner.