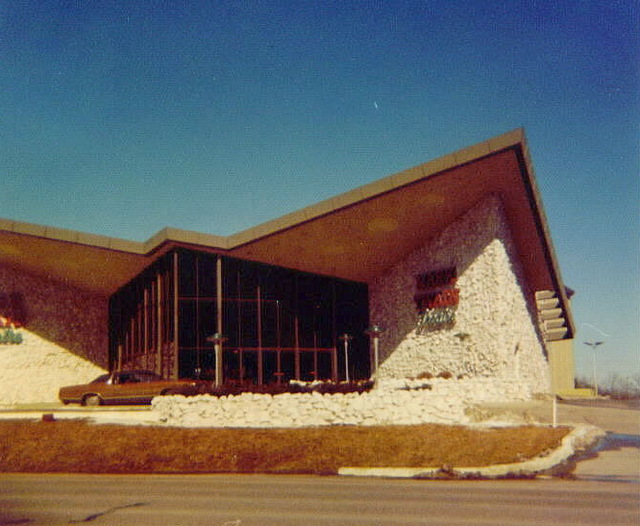 The Mark Twain Theatre was the premier of Fox Midwest Theatres into the St. Louis market when it opened in August 28, 1968 with the 70mm re-release of Clark Gable in “Gone With the Wind”. The theatre was a beautiful large single screen theatre seating 986. The theatre was striking when passing it on Lindbergh Boulevard. It sat back from the street with landscaping and trees lining the front of the theatre. It had two large porticos that came to a point on each side of the theatre and formed a walkway from either side of the parking lot. The front center was all tinted class and the building was covered in white limestone.

A large spacious lobby greeted the patrons with a central concession stand. There were three aisles into the auditorium and the walls were lined with a gold drapery. The screen was curved and the theatre was equipped with 70mm. The screen was covered with Austrian-made curtains that raised and lowered before and after each show.

Located just down Lindbergh from the GCC Sunset Hills Cinema I & II it had no problems because of its size and the huge screen and excellant sound. The Mark Twain Theatre played “Star Wars” from August 5, 1977, and it played for almost five months.

The Mark Twain Theatre was closed in 1985 and a short time later was turned into a banquet hall that remains open today.

I was a projectionist in the St. Louis local IATSE, starting in the early 1980’s. While on the extra board, I had the pleasure of working at the Mark Twain, until the union went on strike against the owner, Wehrenberg. I have to say that at the time, the Mark Twain was by far the best equipped, best maintained theatre in St. Louis. The Norelco DP-75 35/70MM projectors provided bright, crisp images. The plush seating, crushed velvet curtain, clean sound system, and large screen, provided top notch movie viewing experiences.

Hey Ben, or anyone else from the 72-76 era it’s Mike Mowery, shoot me an e , I will always remember what a beautiful place to work and watch a movie that it was.

I worked at the St. Louis Mark Twain in the Late 70s, and into the early 80s. I worked Concession, Cashier, Doorman, Usher, Janitor, and General Building Maint. I enjoyed the Mann ownership a bit more than the later Wehrenberg Theatres ownership, but, both companies treated me well. Mark Twain was a 960 seat theater, which was becoming unheard of at the time. My sister also worked there before me, and Ben Littlefield hired me a few months after my sister concluded her employment (Thanks Ben). Before I left the Theater to start my career, I met the girl of my dreams at the theater, who became my lovely wife to this day. We are still together! One very memorable experience at Mark Twain was the grand opening of “The Jerk”. Carl Reiner, and Steve Martin appeared for the showing and it was awesome! I believe that was 1979. The whole place was a classy atmosphere that is hard to find today, or even in the last twenty years in a suburban area. Maybe someday, the big screen will come back. Thanks to all who made those good times possible!

If any other Mark Twain Friends want to contact.

Rick what a wonderful story!

Girlfriend worked there when it first opened in the 60s…….saw Romeo & Juliet there.

August 28th, 1968 grand opening ad in photo section. Chill Wills opened many of NGC Cinemas in the USA and Canada.

Went to see Close Encounters Of The Third Kind and Superman with my father at Mark Twain. I remember he specifically wanted me to go with him “out of the way” to this theater because it had the best screen. (Thanks Pop!). Later in high school, went with a buddy of mine to see Rear Window there. Now I drive by the the location all the time and think back. Great memories!

New Showcase Presentations in St. Louis article includes a chronology of the 70mm engagements here at the Mark Twain (and other St. Louis area cinemas).

Opened with “Gone with the wind”.