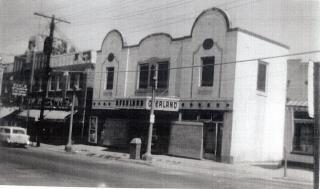 The Overland Theatre opened in 1928 seating 718. This was a really nice neighborhood theatre located in the shopping district of Overland, a suburb of St. Louis. It was a single floor theatre built in red brick with a white terra cotta along the roof of the building and above the poster cases one each side of the entrance. The theatre was rather wide and had a large lobby. There was a good pitch to the auditorium floor so there was no obstruction to viewing the screen. It was a nice spacious auditorium with three aisles leading into the auditorium. A small stage graced the front of the auditorium. The walls were just painted in a dull grey color with wall lighting about every ten feet or so. It did have one large light fixture in the center of the ceiling that looked somewhat like a starburst with different color lights in it.

The Overland Theatre started dropping off in attendance when television came along and went to week-ends only and finally closed in 1957. The front of the building was later remodeled and the auditorium torn away and retail shops were put into the front. The building has no semblance to a theatre today, but the brick and terra cotta are still there.

From my friend Richard Rogers-
When my family moved to 2336 Brown Rd in Overland, The Overland Theatre must have been closed only about 1 year. Being 11 years old I often rode my bike into Overland’s neat little downtown shopping district. On the very first trip I spied the closed theatre and stopped to look into the lobby through the glass of the locked doors. On one such trip I pushed the door and it opened. I walked into the ticket lobby and the inner concession lobby looking around. Not much to see except that the place was filthy and the floor littered with bits and pieces of 35MM film, I would have liked to check out the auditorium but it was pitcvh dark and I didn’t have a flashlight. The next time I brought a flashlight but never found one of the doors unlocked.
James Grebe