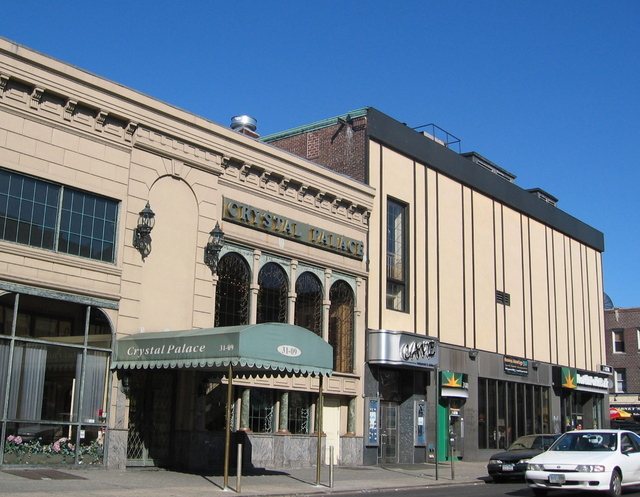 The Broadway Theatre was one of three theatres built by the Small-Strausberg Circuit on the west side of the Astoria section of Queens, near stations of the BMT elevated subway line. It was opened prior to 1926 and seating was provided on a stadium plan, with a raised stepped section at the rear rather than a conventional overhanging balcony.

The Broadway Theatre is now a bank.

I attended the wedding of my mothers office clerk at the crystal Palace and there are some beautiful elements in the lobby but the banquet hall we were in was somewhat tacky and overdone. There was an oversized light fixture in the center adorned with plastic prisms that fell off when the bride tossed the bouquet. It is not oppulent and graceful to the trained eye with good taste.

The Broadway was still open in 1959 and still listed as a Skouras house.

I was driving east down Broadway over the weekend and passed by a building on the corner of 41st Street and Broadway just a block past Steinway that looked very much like a former theater. I found this aerial view of the structure on the local.live.com site that has become very popular on these boards of late:

I don’t have an address, but it’s in the 41-xx block on the odd-numbered side of the street. Anyone know anything about this building? It sure looks like an ex-theater, but it may also have been a lodge of some kind (Elks or some other fraternal order)? Any ideas Warren?

Thanks for clearing that up, Warren. I figured it might have been a lodge if not a theater.

The Crystal Palace is not on the site of the old Broadway Theater. The Crystal Palace is on the corner of 31 street and Broadway in the shadow of the elevated train. It was originally the Oyster Bay and remodeled around the same time as the Broadway’s demise, hence some of the confusion. The Broadway was on the same side of the avenue but on the other corner, the corner of 32 street. The Broadway was gutted and replaced by a supermarket which gave way some 25 years ago to a Green Point Savings Bank which remains to this day (being taken over by North Fork bank)Inside the bank are a couple of large photos of the Broadway theater. I lived a couple of avenues away but used to go out of my way home from school each day to watch the demolition. There was a wall of plywood erected around the perimeter with large enough gaps to get a clear view. This had to be somewhere between 1963 and 1965. Hope this clears up any confusion. Just found this site and LOVE it.

It looks like the theater is now a bank.

Silksox, if you look at the postcard view that Tinseltoes posted the link to.You will see that The Broadway was where The Crystal Palace is.The supermarket where the bank is was a Bohack store.

Actually judging by the street view, it appears to be a Capital One Bank now.

The Crystal Palace catering hall is not the Broadway Theatre, the building on the corner with the bank at the corner is the Broadway theatre with the covered over facade. The supermarket was never on this corner, the theatre was. Today’s posting should clear everything up. The addressess never lie but are misprinted in many theatre manuels and even phone books. A theatre is a theatre is a theatre by site, you also step back a few blocks and look at the roof, a dead giveaway.