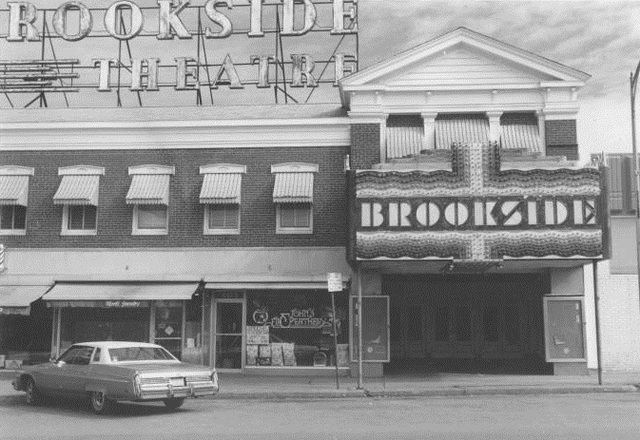 The Brookside Theatre and a very impressive from facade in a Corinthian style. The front came to a V at the top with molded leaves all along the roof. The theatre had a narrow front though and the box office was free standing.

When you entered the theatre it had an L shaped lobby with the concession on the right and then you went on around the lobby to another lobby in the back of the auditorium with the stairway to the balcony at the end. There were three aisles into the auditorium. The front had columns lining the walls on each side of the stage. Plush red velvet curtains adorned the stage.

The Brookside Theatre closed in 1977 The building was being renovated into a night club in January 1978 when a fire broke out and destroyed the building.

Wish someone had a photo! I think I remember seeing movies here in my teen years, late 60’s. Shame it burned. Much speculation has gone on regarding the multitude of theatre fires back then. History has many viewpoints.

Here is a summary of the antitrust suit:
http://tinyurl.com/yx88zh

Does anyone have any pictures towards the end – both interior and exterior? When I left the KC area it actually because a $1.00 house that started out at only $,50 and still had the very large movie screen that came out of the Tower Theater just before it was demolished. The drapes and screen were actually were brought forward in front of the original screen because the new screen was designed as a curved Todd-A-O wide screen. For years the Brookside was a First Run House. I still know many people that miss it and wish it were still in there beloved Brookside neighborhood. There were other spaces that the grocery strore could have been replaced but thanks to the suspicious fire, the grocery store was able to be rebuild as a twice as large modern store. More pics posted would be most appreciated.

Oh wow. I can’t believe it. The Boxoffice article features the premiere of “Magnificent Men…” and I was there! I was working as a cashier, my first (summer) job after high school. I remember that night, and the theater, well. I remember the manager Chuck Barnes too. I loved that theater. My dad worked in the movie business for 50+ years in KC. My favorite theaters were the Brookside and the Waldo (and the Uptown and Midlands). I saw Flower Drum Song at Brookside 5 times! What great memories. Thank you!!!

The Brookside was one of Kansas City’s theaters that adapted its decor, at least once, for a particular movie. I very well remember that the theater turned it’s long concession behind the entrance to the auditorium into a Parisian sidewalk cafe in conjunction with the movie, Can Can. Long after that movie ended its extended run, the sidewalk cafe remained, possibly until the theater’s closing. Another theater that did that was what is now the Alamo Drafthouse at 13th & Main. After being the RKO Missouri, it reopened in 1960 as the Empire. The entire decor was gold and blue to go along with that it opened with: Exodus. That decor remained, possibly even after the theater was carved up into several auditoriums.

Mann Theatres turned this to an “Any Seat/50c/Anytime” house (as they had with the Uptown before its closing) on Wednesday, April 10, 1974, with a double feature of BATTLE FOR THE PLANET OF THE APES and the 1971 Charles Bronson/Toshiro Mifune co-starrer RED SUN. Within half a year the bargain programming netted double features like THE DAY OF THE DOLPHIN with THE TRAIN ROBBERS or Disney’s HERBIE RIDES AGAIN! with the independently-made 1972 family film GEORGE!

Admission goes up to 75c-any-seat on Wednesday, November 27, 1974 with a double feature of Robert Redford in THE GREAT GATSBY and Woody Allen in PLAY IT AGAIN, SAM.

Adult admission lifted AGAIN to $1 starting Wednesday, April 2, 1975 with Marlon Brando in Bertolucci’s LAST TANGO IN PARIS and Woody Allen’s film of EVERYTHING YOU ALWAYS WANTED TO KNOW ABOUT SEX BUT WERE AFRAID TO ASK (This marquee was sandwiched in-between family double-features on either week. Children’s tickets were 50c afterward).

A deafening public outcry must certainly have frightened Mann into reducing the uniform ticket price back down to 75c on Wednesday, May 14, 1975 for THE LEGEND OF BOGGY CREEK and the 1972 rattlesnake terror of STANLEY.

Began alternating bargain with special programming on Sunday, August 24, 1975 with the 70mm presentation of the X-rated PANORAMA BLUE. HELLO, DOLLY! in 70mm followed in September. By late December, the bargain emphasis was eliminated. By Spring 1976, it was back again. On Friday, October 1, they advertised a “New Fall Policy of 1st Run Engagements” starting with Lina Wertmuller’s ALL SCREWED UP and showed artistic films until around Christmas…

On Wednesday, December 8, 1976, the Brookside unexplainedly went from their usual program of foreign and high-art films (typified by the previous week’s showing of the short films “Jimi Plays Berkeley” from 1971 and the Beatles' 1967 TV film “Magical Mystery Tour”) to the 1974 XXX stag film HAPPY DAYS (not to be confused with the then-current ABC/Garry Marshall TV show with Ron Howard and Henry Winkler; up to three other KC theaters were showing it and the weekday ad just suddenly states “HAPPY DAYS (X)” with its showtimes.) This was its ignominious final marquee when it closed for good on Tuesday, December 14, 1976. [Kansas City Star]

This opened on February 18th, 1937. Grand opening ad in the photo section.