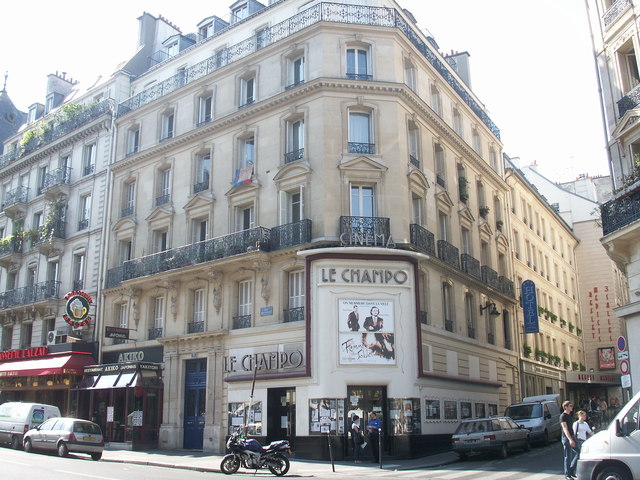 Le Champo is one of the famous art movie theatres of Paris.

Generations of students and cinema lovers even directors learnt about cinema going to the Champollion.

Opened in 1938 in the center of the Latin Quarter at the ground floor of the building and replacing a book store, Le Champo had one screen and 150 seats. It is surrounded by universities.

In 1941 a fire destroyed the projection booth and it was decided to construct a new one in a very original way in a room beside the screen. The picture is reflected by a periscope on a mirror at the rear of the theatre and then projected on the screen.

In 1955, a small nightclub downstairs was converted to cinema showing 16mm prints. Named Actua Champo it is apart from the Champollion upstairs and there were two individual lobbies and cash boxes.

A major refurbishing in the 1980’s modernized the Champo, giving it a single cash box and lobby and two very confortable auditoriums. Always a clever art movie programme, the future seemed safe.

Around 2000, the lease had to be renewed and the owner of the building intended to close the theater in order to rent the building to a bank. Fortunately, a huge protest avoided this prospect, but the threat is still in the air.

Le Champo has a lovely internet site with a picture tour.

exterior in sept 2009, some kind person had parked a Citroen 2CV in front to add that extra Parisien “je ne sais quoi"
http://www.flickr.com/photos/woody1969/3951014099/
and from slightly further back, so you can see up the side street the three screen Relfet Medicis and beyond that the two screen Filmotheque Quartier Latin
http://www.flickr.com/photos/woody1969/3951010217/