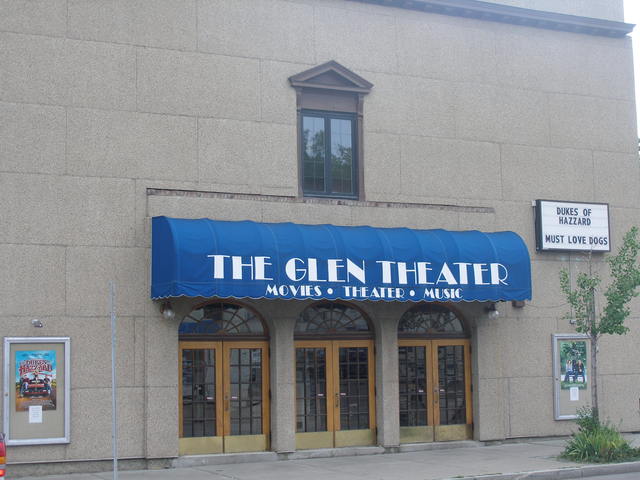 Opened in 1924, this theater was a first run movie house for decades before difficult times forced its conversion into an adult movie house.

Bought by a local resident in 1996, the Glen Theater was restored and reopened as a second-run theater that occassionally snags a new release. A second screen was added in an adjoining former retail unit and the Glen Theater now plays first run movies.

Operating successfully for the past five years, it has once again become a local favorite. It was closed in July 2019, and sold to a new owner who has since reopened the theater.

Homepage, only has movie listings:
http://www.glentheater.com/

I attended a showing of Must Love Dogs on 8/22/05 in the original single screen theater. This theater is technically now a TWIN and could be updated as such.

The theater purchased the adjoining building, a former drug store, and converted it to an additional theater screen. Each screen has its own lobby. Both operate under the Glen Theater name. The new lobby matches the dÃ©cor of the original theaterâ€™s lobby. The original theater has many old black & white photographs of movie stars in its lobby. The original auditorium has movie posters on its walls, which are painted white with hot pink accents. I took some interior and exterior photos that Iâ€™ll post shortly.

I was told by the ticket taker that the theater had been shut for 16 years before it was restored.

TC: I was in Watkins Glen 2 years ago and did enter this theatre during the vintage racing weekend as they were showing vintage racing footage. At that time I didn’t have the ‘theatre bug’ so I didn’t notice the interior details as pictured in the shutterfly.com photos you have provided CT so will have to look a bit closer the next time I find myself in that beautiful and quaint town in the Finger Lakes Region of NYS.

I may have touched on this before, but I was not aware that this theatre was twinned. I visited the Glen several years ago and it was not twinned at that time.

Also this theatre had a marquee different than the awning type marquee that is present today, but I believe the City of Watkins Glen wouldn’t allow the former marquee to extend so many feet from the curb and the street. Perhaps someone who lives in WG can explain further explain this decision. I would love to see a photo of what the former or original marquee looked like.

The original theatre is intact, it has not been split. The 2nd theatre is a few store fronts down in what used to be a drug store