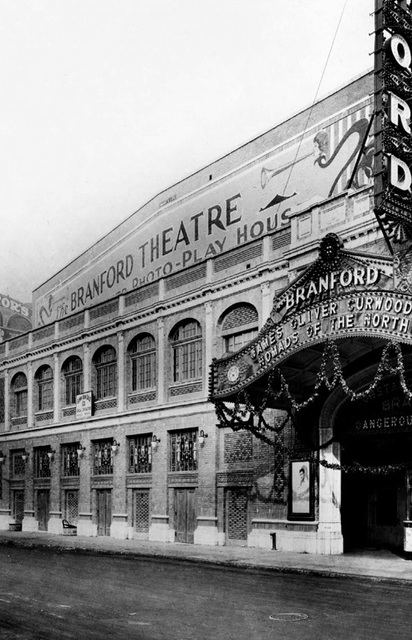 The Branford Theatre was opened December 17, 1920 with Fred Wentworth as architect. It was long one of the top movie theatres in downtown Newark due to its link to the Stanley-Warner circuit. To achieve a seating capacity of 2,844 in the auditorium, lobby and stage facilities were kept to a minimum, earning the Branford Theatre a reputation as a “big barn” without architectural distinction. It was converted into four screens on September 15, 1978. It was demolished in 1985.

What an incredible marquee! The “upgraded” marquee posted by TC on 7/10/07 is also handsome, but IMO, doesn’t compare to the original plus what must have been a beautiful Blade. Another shame for Newark that it appears that none of its palaces was able to survive whereby “lowly” Jersey City was able to keep two.

The RKO Proctor’s, Paramount and Adam’s Theaters are still standing, but have been closed for MANY years.

Here is a 1942 news story from the Pittsburgh-Post Gazette:
http://tinyurl.com/8qfvam

Here is a 1981 photo. It looks like there were four screens at that time:
http://tinyurl.com/c8vuzm

The only time I recall being in the Branford was in 1982. I was in downtown Newark with a couple of hours to kill, and it was about the only cinema still open. By then it had been cut up into a four-plex, the interior was coated in that ugly color scheme of dark red and blue that the Stanley-Warner chain was so fond of, and this once proud first-run movie palace was showing crap like â€œDrive-In Massacre.â€ How very sad.

I was the head doorman at the Branford in 1972. My salary was $1.65 an hour. I replaced Sid,who was not happy about that. But I made friends with John Hudson,and Hassan,from Pakistan. All ushers wore tuxedo’s and bow ties and polished black shoes.

The manager was Mr. Osborne. The assistant manager was named Mike. In an office on the second floor they counted by hand the ticket stubs I collected after I completed my shift. Occasionally I accompanied Mike or Mr. Osborn to Newark Airport to pick up the new films;crated in metal boxes,they were bulky and heavy.

A red haired woman named Lucy ran the concession stand. The elderly projectionist name was named Andy. He ran the noisy carbon light projector from a small cramped booth. I was friends with the Newark cops who worked in the Branford. One policeman, Johnny, was a Korean vet. I had done an infantry tour in Vietnam; we could talk about such things. In the usher locker room Johnny once told me,“You don’t know nothing you never seen a human wave attack.” And he closed his eyes and looked away.

It’s sad to see that the Branford and most of the theaters in Newark are gone. Each was ornate and beautiful and layered with character and history.

Became a quad cinema on September 15th, 1978. Ad in the photo section.

I can’t understand why anyone would have considered the Branford a “…‘big barn’ without architectural distinction.” Photos show Fred Wentworth’s restrained Adamesque interiors to have been quite lovely.