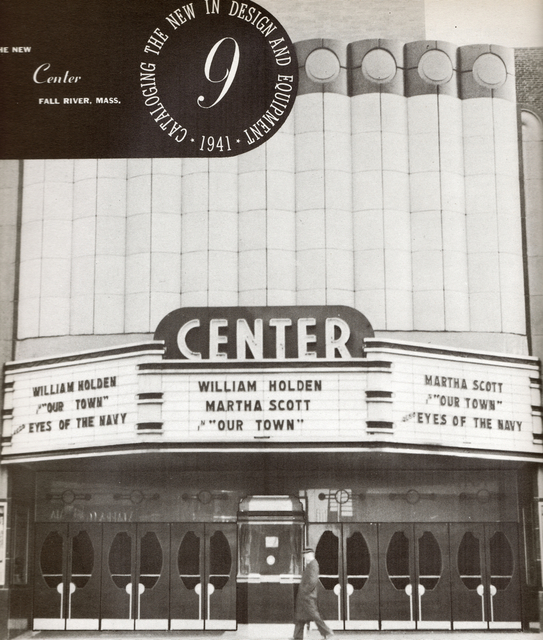 The Center Theatre was built for the Interstate Theatres chain and opened on October 16, 1940 with “The Howards of Virginia” starring Cary Grant. Designed by Providence, RI architect David Shapiro, seating was provided in orchestra and balcony levels. There were attractive murals on the side-walls by interior decorators Riseman & Lercari.

It was closed as a twin screen theatre in May 1977.

Mr. Deluca, in your June 26, 2006 entry you state; “The Center closed in May, 1977”. Yet in your June 27, 2006 entry it is noted that “on Tuesday, February 6, 1978, people came in off the street seeking refuge in the Center lobby. Saturday Night Fever with John Travolta was on one screen, Heroes with Henry Winkler was on the other.”. Had the Center closed in 1977 and then re-open for a short time or could the information in regard to the 1977 closing be in error?.

Also was it the Academy and the Strand (Cinema I) which were the 2 x-rated theatre? I also seem to recall at that time a small theatre further south on Main St. which featured x-rated movies too. I believe it was not far accross the street from the old Capital Theatre (which was then a bolling alley or furniture store?) and was housed in what had been a small threatre long shuttered before it became an “x” house. Forgive me here as I am really picking my memory from decades ago!!

Dick, I didn’t notice that closing date discrepancy. I was quoting written sources I found, some of which may have contained errors. The other x-rated house on Main Street was Cinema I. It was opened, I am assuming, by the folks that had run the one on Pleasant Street once it closed. So there were two theatres named Cinema I at different times. The later one was the porno house of which you speak, diagonally across from the Capitol. I believe it was a small new theatre, carved out of an existing building. That theatre also has a page on Cinema Treasures, right here.

Thanks for bringing my memory into focus!

I still mourn the loss of the Center theatre. What a treasure that was and appreaciate the history details you mentioned in your entry above. I only wish someone had photos of this theatre, both the exterior and interior were interesting from an “deco” point of view.

I live down in the south here in Roanoke, VA and all but one theatre is gone. Most people around here have memories of only but one or two theatres that were here but I know due to the size of the city there were many more. Fortunatly we still have the Grandin Theatre which is in a nice little neighborhood not far from where I live. It’s an old theatre that has been restored but it is not an Architecual wonder. Nevertheless the Grandin provides this city with many films which never would be featured at the mulitplexes. I am grateful to this organization and contribute what I can to keep this theatre going.

Dick, all I have in pictures of this theatre are the following two made from poor photocopies:

There is a MGM Theatre Photograph and Report form for the Center Theatre with an exterior photo dated May 1941. That photo is posted just above by Gerry DeLuca. The Report states that the Center is on South Main St., that it has been showing MGM product for 1 year; that it was built in 1940 and is in Excellent condition, and has 894 seats on the main floor and 496 balcony seats, total: 1,390 seats. Someone wrote “was Olympia” on the form, which is incorrect.

I can confirm that the Center Theater was open in 1978.

…and it did offer it’s services to those during the great Blizzard. During that storm buses ceased running prior prior to some school closings, and roads became impassible. Several I knew took shelter in the Center, which welcomed, and allowed to stay, in it’s facility for the next few days. These souls unable to make it home through the storm, and away from the places they had worked or went to school, now shut down.

I remember well the center, it being my well looked forward to, destination every Saturday afternoon. This throughout the sixties and seventies.

It lacked the glamor of the Durfee but ran all the movies I ever wanted to see.

As a child I remember the church newspaper condemning the showing of “the robe” at the Center…but I also remember walking to it with my school group from St. Louis School to see a saints biography shown there.

Downtown was abandoned by retail, and parking there was a problem, by the late seventies. Movie houses in malls offered more to do, and far better parking. The cinema was doomed by this, as well as all the other factors that affected Downtown Fall River.

…but I’ll always remember the films I saw, the carpeted stairs, and all that made the space a special one.

The Center Theatre has been demolished. A modern government office building now occupies the site.