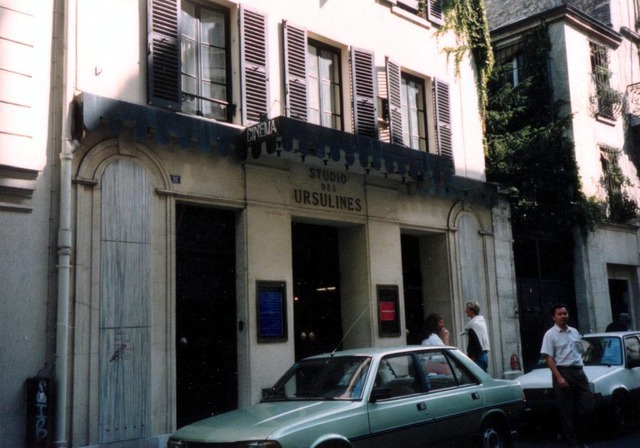 Built on the site of a 17th century Ursuline convent, this theatre first showed Charlie Chaplin movies, but after a period of live theatre, returned to being a movie theatre in 1926 under the management of a French actor.

This little theatre with a balcony has a very charming facade looking like a romantic country house. At the beginning of the talking movies, the premiere of Sternberg’s “Blue Angel” with Marlene Dietrich took place here, and ran 14 months.

The same owner and the same policy until 1958 gave the Studio des Ursulines a famous reputation. His assistant ran the theatre when he retired. In 1968, a major renovation, respectful of the theatre’s original appearance, keeping the stage, gave more comfort and quality to the Studio.

By 1978, the location of the theatre became a problem with the opening of several new screens in the Latin Quarter, and the Studio closed. After being dark for a long time and after unsuccessful experiments to reuse the theatre, the Studio started a new life in 1987 with a clever multiprogram policy.

Bought by a film company in 1996, a new renovation improved the quality of the lovely auditorium by adding a new sound system. The Studio des Ursulines is now under control of ARP (a directors and producers association) and its future is safe. It is showing first-run movies and deserves a visit.