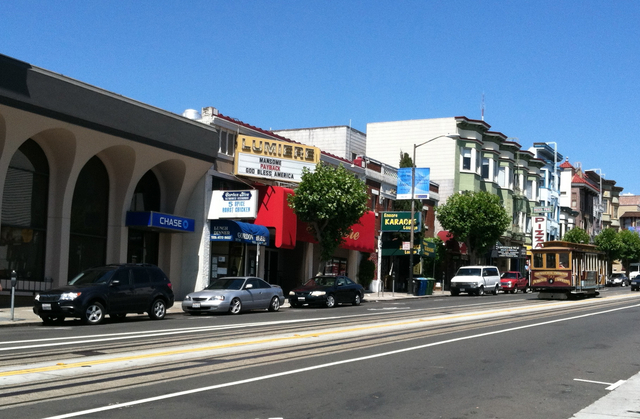 Another of San Francisco’s select art-house cinemas, built in 1974 by Mel Novikoff of Castro Theatre and Surf Theatre fame. It opened January 24, 1975 with “Lenny Bruce Performance Film” & Kenneth Anger’s “Scorpio Rising” & Jack Kerouac’s “Pull My Daisy”. It was taken over by Landmark Theatres in 1991. Seating was provided in the two screens for 100 & 250. It underwent extensive renovations and reopened as a triple screen theatre on December 16, 1983. It was renovated in 2003. The Lumiere Theatre was closed on September 23, 2012 with Francois Cluzet in “The Intouchables”. By 2022 it was in retail use as a clothing store.

I saw Bagdad Cafe there in the mid 70’s when it was only a single screen. The information above said it opened around that period but it didn’t strike me as a new space. I wonder if that was intentional.

The one and only time I’ve ever been to the Lumiere was to see Sling Blade in late 1996 or early 1997. Don’t remember much about the theatre, other than it felt quaint and antiquated at the time.

Here is an article confirming the closing from the San Francisco Chronicle.

The Lumiere was always a bit of a poor stepchild in the world of San Francisco cinemas. Run by the penny-pinching Blumenfeld chain for years and it showed. I don’t think Landmark did much better. They had quite a cockroach problem in auditorium #1 due to the restaurant (still in business) next door.

This opened on January 24th, 1975. Grand opening ad in the photo section.

Loved to catch a film here and then get the five spice chicken over rice downstairs on a Saturday afternoon. Saw so many great films here. Miss it.

I have to admit I hated this theater! Having grown up in the suburbs and been to many large theaters, this was my first taste of theaters that had been divided up. Not only was the theater SMALL, I remember somehow I was seated at an angle to the screen! Only went once in 1998 I believe to see “Kurt and Courtney”

Current use should be: Retail. Now a casual clothing store.