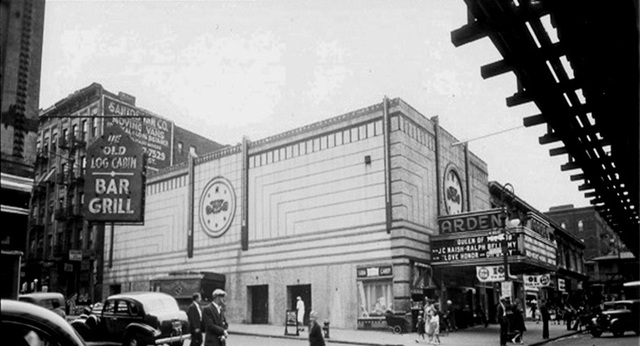 A long forgotten “nabe” of Manhattan’s Upper West Side, the Arden Theatre was possibly the only movie theatre that ever operated on Columbus Avenue. It opened in 1934. Never more than a late-run house, it became a Spanish language movie theatre around 1952. It was closed around 1958 as a victim of TV competition, and was eventually demolished for the building of the Park West Village apartment complex.

The CARIBE and the ARDEN are listed as being the same theatre.

In 1937 the New York City phone directory had separate listings for “legitimate theaters” and “theaters-motion picture etc.”. I’m not sure what the etcetera would be. Additionally you would have to construe movie theaters as illegitimate by that criteria. In any event, the Arden was listed at the above address. Phone number was ACademy 2-7880.

Opened in 1934 by Wilkast Theatres.

If this was the only movie house that ever existed on this corner, then it had to have been the house that was the subject of the following item in the December 20, 1913, issue of The Moving Picture World:

“The St. Brennen Hotel, located at 103rd Street and Columbus Avenue, New York City, has been converted into a picture house. The auditorium has a seating capacity of 400 persons; 300 of which seat on the parquette floor and the remaining 100 in the balcony. Boxes have been provided. The investment involved an expense of $4,000. The admission prices are 10 cents for the orchestra and balcony and 25 cents for the boxes. The name of the house is the Columbia and it was opened Saturday, November 29, by F. G. Cook, the manager. The theater was designed by architect Wm. H. Gompert, of New York City.”If somebody can dig up a pre-1913 directory with an address for the St. Brennan Hotel, and that address matches the Arden Theatre’s address, then it will be confirmed that the house opened in 1913 as the Columbia Theatre. But the different seating capacities of the Columbia and the Arden, if both are accurate, suggest either an expansion at some point, or that they were two different theaters.

The Columbus (or Columbia) had to have have been across the street from the Arden’s site, then.

And one or the other of the publications must have gotten the name wrong, unless it was changed between 1913 and 1914.

A New York Times blurb lists it as the St. BRENDAN HOTEL.

The Moving Picture World was typically riddled with misspellings, so I’m not surprised they got the name of the hotel wrong. It was probably the publication that got the theater’s name wrong, too.

Does anyone know how long the Columbus Theatre remained open?

I grew up on West 103rd Street in the 1940s and early 1950s before the city tore down all the buildings and put a project. I remember going to the Arden and seeing scary Frankenstein movies there as well as the Bowery Boys movies there. It use to cost 25 cents to go there. There was a candy/news shop on the corner, Hymies where we got penny candies and got Coca Cola. My brother and I and the other kids use to play American and Chinese handball on the side of the theater as well as curb ball in the Street. West 103rd St stood out because: 1. Humphrey Bogart grew up there but down towards fancy Riverside Drive. 2. The Puerto Ricans who tried to assinate President Truman lived in a large boarding house on 103rd and Amsterdam. 3.Andy Warhole lived for a while on 103rd St between Columbus and Manhattan Ave. 4. Opposite the Arden was an Irish Bar where some disturbed Korean Vet exploded a hand grenade in 1951. I remember the 103rd St block party that took place to celebrate the End of WWII in Europe when Hitlers effigy was burned. Those were the days.

To Jerryon103St I grew up on 102nd Street and practically lived in the Arden, with my brother and our pals. We got all our goodies at Hymies, before we went in to see the shows (always double features). The bombing of the bar took place in 1952 (not ‘51). It had been an Irish bar for years, but had become a Puerto Rican bar called the Caribe, just as the Arden was changed to the Caribe, too. The “disturbed Korean vet” was a U.S. Marine Sergeant who was a decorated hero of the Chosen reservoir battle. He was home on Christmas leave, along with his childhood buddies who were also on leave from the service. They had attended a party and had too much to drink. One of their sisters had been raped a few days earlier by a Puerto Rican man. He was caught and arrested, but the soldiers were on a punitive mission of revenge. The more they drank, the more they lost their reason until they finally went to the Caribe to exact some punishment. In those days, a good fist-fight was the law of the land. They never intended to spill blood, but madness finally ruled the moment. A grenade was thrown, but not by the Sergeant. Not necessary to say who did threw it. EXPLOSION! Madness! Soldiers ran out, grabbed a cab and sped off. Police pursue and overtake cab. Soldiers run…. staggering drunk on foot to 96 St. in front of Holy Name Church where cops overtakes the sergeant and shoots him in the back of the head. Sergeant staggers. Cop shoots him a second time in the back of the head. Sergeant falls onto pavement, calls to his buddies who have stopped running and are screaming his name. Sergeant dies. Buddies are court marshaled. Cop who did the unnecessary shooting is transferred. Everybody cries, every looses. Never should have happened. Never would have happened……………but it did.

NOTE: This story is NOT for reproduction or publication.