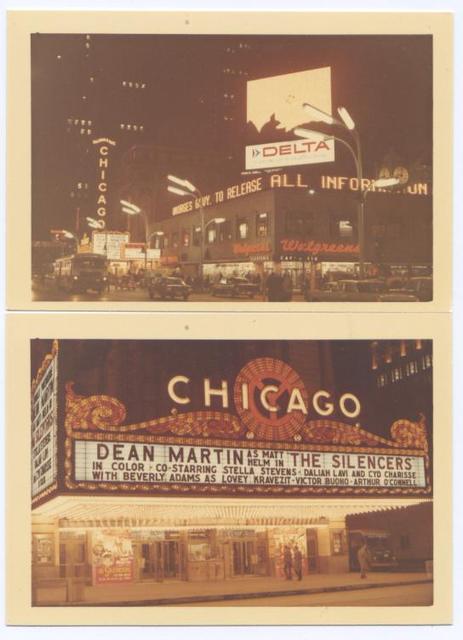 One of the grandest movie palaces ever built, this 3,880-seat palace opened on October 26, 1921 with Norma Talmadge in “The Sign on the Door” & Buster Keaton in “The Playhouse”. There was a 50-piece orchestra and organist Jessie Crawford opened the Wurltitzer 4 manual, 29 ranks theatre organ which in 1923 had a second console added to the instrument. This console was opened by Mrs Crawford (Helen Anderson) and she played in tandem with her husband for the following three years.

The Chicago Theatre was designed by Rapp & Rapp, the favored architectural firm of the theatre’s original operators, the Balaban & Katz chain, the Chicago Theatre was their flagship house. The façade of the building was based upon the Arc de Triomph in Paris, France and is glazed in off-white terra-cotta. The interior design is based on elements of the Palace of Versailles in France. Seating was provided for 1,984 in the orchestra, 392 in the mezzanine and 1,504 in the balcony. The stage was 112ft wide and 30ft deep. Later operated by Plitt Theatres, they closed the Chicago Theatre as a movie theatre on September 19, 1985 with Michael Dudikoff in “American Ninja” & Michael J. Fox in “Teen Wolf”.

The Chicago Theatre was restored to its 1920’s appearance in 1986, reopening on September 10, 1986 with Frank Sinatra on stage. The huge six-stories high vertical sign is original to the building and together with the marquee (dating from 1949) have served as the unofficial emblem of the City of Chicago. It now hosts a mix of concerts, live entertainment, and assorted special events (like the annual Glamorama fashion show sponsored by Macy’s -formerly Marshall Field’s- and the occasional movie screening for the Chicago International Film Festival).

“Later operated by Plitt Theatres, they closed the Chicago Theatre as a movie theatre on September 19, 1985 with Michael Dudikoff in “American Ninja” & Michael J. Fox in “Teen Wolf”.”

Both films were released in August, so I believe considered first run if showing in September.

That I do not know, other than various premieres. But on page 7 of the archived comments, is a May 1, 2007 comment that lists all the films and their run dates from 1964-1980. Which you can use to do any research on what were possibly roadshow engagements or not.

to DavidZ.- I looked at the list you mentioned and none of
the films listed were roadshow engagements.

OK, I’d say check the State-Lake across the street and the Oriental now listed as Nederlander on CT.
The film lists/dates for those theatres were added the same time in 2007 in the comments.

Enlargeable version of a previously posted 1996 Library of Congress photo in link below. More photos as well.

Clickable link for above: Chicago Theatre