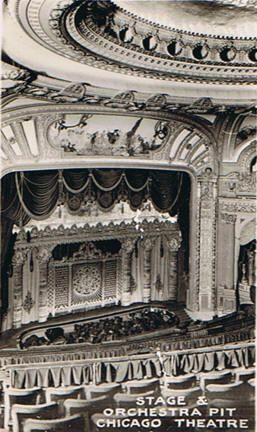 The Chicago Theatre was designed by Rapp & Rapp, the favored architectural firm of the theatre’s original operators, the Balaban & Katz chain, the Chicago Theatre was their flagship house. The facade of the building was based upon the Arc de Triomph in Paris, France and is glazed in off-white terra-cotta.

The interior design is based on elements of the Palace of Versailles in France. Seating was provided for 1,984 in the orchestra, 392 in the mezzanine and 1,504 in the balcony. The stage was 112ft wide and 30ft deep. Later operated by Plitt Theatres, they closed the Chicago Theatre as a movie theatre on September 19, 1985 with Michael Dudikoff in “American Ninja” & Michael J. Fox in “Teen Wolf”. - Notes Ken Roe