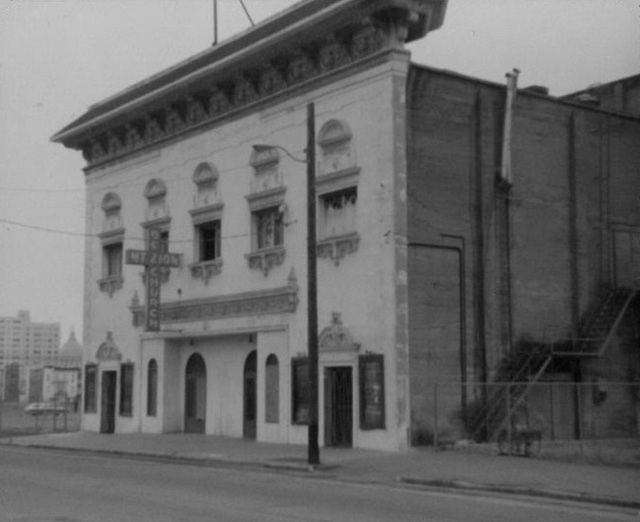 Opened as the Princess Theatre on August 31, 1907 with vaudeville. The April 1906 earthquake and fire which had devastated San Francisco had left the downtown area in ruins, and the Fillmore district became the new “downtown” for a while, resulting in several large theatres being built within a few square blocks of each other, among them the Princess Theatre and its next door neighbor, the Orpheum Theatre (later Garrick Theatre) (qv).

On October 14, 1935, the Princess Theatre re-opened as the Ellis Theatre and, as such, survived as a large, popular, third run Fillmore district house up until mid-1952 when the continuing deterioration of the neighborhood brought about its demise. It later became a church, and was finally torn down in the early-1970’s.

The Princess was one of five San Francisco theaters designed by the architectural firm of O'Brien & Werner (Matthew O'Brien and Carl Werner) that were listed in an ad for the firm in the 1907-1908 edition of Henry’s Official Western Theatrical Guide.

The April 27, 1911, issue of the City and County of San Francisco’s Municipal Recordreported that Samuel Loverich had been granted a motion picture permit for the Princess Theatre, Ellis Street.

Here is a 1907 postcard photo showing the Princess Theatre and its neighbor, the Orpheum, later to be called the Garrick Theatre.

Here is another photo showing the Princess/Ellis Theatre late in its history, during the 1960s, when it had become Mt. Zion Church.

From the same time period, the back of the theater, with the name Princess Theatre still painted on the stage house. Everything around it had already been demolished for an urban undo-all project, and the theater building would soon fall victim to the same folly.

The October, 1907, issue of the trade journal Concrete had this item about the Princess Theatre:

“The Princess theater, just completed, enjoys the distinction of being the only theater structure in the city which is constructed entirely of reinforced concrete. It has a seating capacity of 1,600 and its total cost was in the neighborhood of $180,000.”

“Harlem of the West,” a recent book tracing the history of jazz in the Fillmore neighborhood, frequently cites the Ellis Theatre. Previously as the Princess, it was one of the first vaudeville theatres in San Francisco to book black entertainers. The Depression-enforced conversion to movies as the Ellis reduced the theatre to late-run status. To combat the arrival of home TV, management introduced a weekly talent night, when amateurs could compete for cash prizes. Pianist Federico Cervantes recalled: “A radio personality named ‘Fatso Perry’ ran the shows, and as his name indicates, he was quite obese. I got on the musical map by winning a prize of $50, big money at that time. After that, I was hired as the pianist for a little band that played for contestants. The Ellis was usually crowded. A lot of people dropped in for the chance to perform, and their friends came to cheer them on. Everybody would dress up.” Teen vocalist Polaya Ballington Davis is probably the most famous of the Ellis contest winners. The legendary Johnny Otis, who happened to be in the audience that night, was so impressed that he signed her to a recording contract and numerous hit singles under the new name of Sugar Pie Desanto.