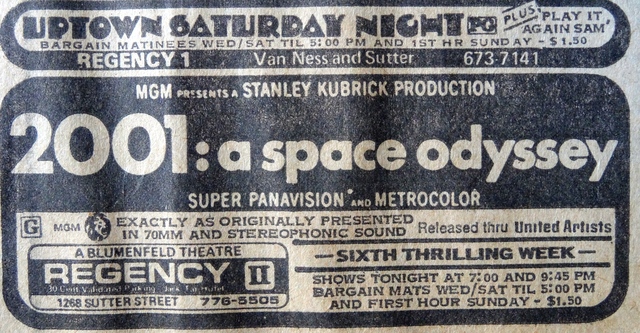 Because of the success of the Regency I (qv) Blumenfeld Enterprises took over the space formerly occupied by the Avalon Ballroom, just around the corner, and converted it into a theatre also, naming it Regency II; it opened on December 25, 1969 with “The Activist”.

Although Blumenfeld’s bookers always gave Regency I the pick of the pictures, there were plenty of good films to go around, and Regency II also found itself with long lines waiting to see such popular and critical favorites as “Tell Them Willie Boy Is Here”, “Being There”, or Woody Allen’s “Love and Death”.

Once inside (the theatre was upstairs, an escalator took you up; you had to use the stairs to go back down), the ticket buyer was rewarded with better projection, wider screen, more comfortable seats, and a friendlier manager than he or she would have encoutered around the corner at Regency I, but there was still the problem of accesibility for the disabled.

Regency II served filmgoers more than thirty years, finally closing its doors permanently on March 26, 2000. It became a ballroom, and the building is now office space.

What an easy theatre to miss,Guess the locals had it all to themselves and that ain’t a bad thing!

I saw quite a few films here; I think the last one I saw was “The Last Starfighter.” It was actually quite easy to find, and was during its time part of a little cinema district between Van Ness and Polk, that included the Regency I, the Galaxy, the Royal, and the Lumiere, all within easy walking distance from each other. By the time AMC opened its multiplex on Van Ness, these theaters did not stand a chance. Because it was formerly a ballroom, the was almost no rake to the floor, but it still was a good place to see a film.

The one movie I saw at the REGENCY II was the reissue of THX 1138, in the Fall of 1977; this was, of course, the peak of the STAR WARS craze, when any and all Science Fiction would find a ready audience.

As I recall,the REGENCY II did make the news the following Spring, with the release of COMING HOME; there was a protest, as the theater was not wheelchair accessible, and this was a movie about disabled Vietnam Veterans.

Blumenfeld owned the Regency 1, 2 and 3, plus the Royal, Castro and Alhambra. The R3 was the smallest but had the best location (plus the management team of Jim MacMillan, Aaron Betts and Tseghazeab “Steven” Estisanos)l the R1 had the best movies (as noted above) and the bossiest, crankiest manager; the R2 had a succession of managers and the Royal had great managers but a bad location. When I was a Blumenfeld manager years ago, they often moved managers between theatres (many managers got fed up with their low salaries and lack of candy commissions and quit). The R3 closed years ago, reopened as a playhouse and currently is Ruby Skye, the city’s premier nightclub.

Went there only once and saw the movie Carrie. It was a nice place to see a movie, but the seats were uncomfortable.

Recent news. It has been Demolished. Nothing but a hole in the ground. I’ll try to take pics soon and upload them.

This has NOT been demolished! It’s now the Argonaut advertising agency.

I remember seeing Days of Heaven in 70mm 6-track sound and you had to take an escalator to get up to theatre. Was it this one or were there other theatres that had an escalator?

Regency II did have an escalator from the street level into the lobby.

Worked there from ‘91 til they closed. Always had the same management team while I worked there.

I started off as an usher there, worked in concessions for a little bit, and closed the theater in the Box Office.