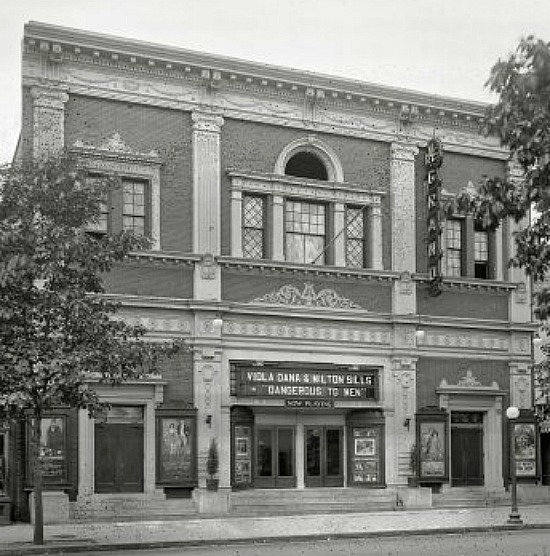 This theatre opened as the Avenue Grand Theatre in 1910, on Pennsylvania Avenue, near Seward Square and not far from Capitol Hill. It was designed by architect William C. Allard in elegant Georgian Revival style. Remodeled in March 1916 by architect Appleton P. Clark when the theatre was taken over by Harry Crandall. By 1941 it was operated by Warner Bros. Circuit Management Corp.

In 1956 it was renamed the Capitol Hill Theatre, it remained in operation until 1970, when a fire broke out in the theatre and it was gutted. It was demolished and an office building sits on the site today.

Theaterowner DON KING did a really smart thing taking over the shabby Avenue Grand double feature house and playing first run exclusives at higher admission prices. Being the only theater showing a particular movie would lure people into the then-crime-ridden Capitol Hill neighborhood. Eventually though, high crime under Washington’s cocaine sniffing mayor Marion Barry (D) got the best of this place. Burning the theatre down was the final straw.

Here is a 1920 photograph of the Avenue Grand Theatre, a current view of the site and some more details:
http://www.shorpy.com/node/5453?

There was another theater in D.C. named the Capitol Hill. It was a twin, two auditoriums back to back. I saw YANKEE DOODLE DANDY there sometime in the early eighties. It was across the street and a block or two from the Penn.