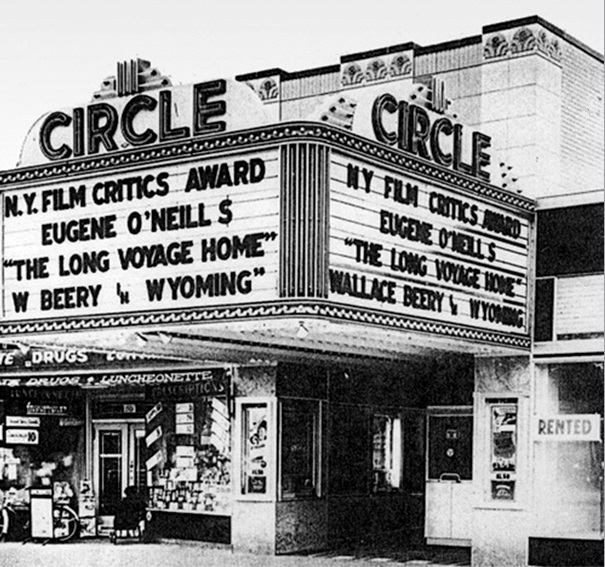 The Circle Theatre was designed by Charles Sandblom and is a near-twin of the Mayfair Theatre in Queens, which is currently a venue for Bollywood films.

The Circle Theatre opened in around 1941 for David Weinstock & Kay Theatres Corp. Seating was provided on a stadium plan, with a stepped raised section at the rear. Later it was operated by Brandt Theatres chain and it was twinned by 1983. It was closed in 1985 and became a fitness center. By 2018 it a church.

This theater was a twin when it closed in 1985. I remember that New York expected a Noreaster for the first time (I guess a new term then) and the city shut down around noon on a Friday. The storm was not as bad as they thought it would be and everyting was back to normal. The Circle though didn’t reopen. I remember the last film I saw there was “The Legend of Billie Jean”. remember going there in 1968 and seeing “Planet of the Apes” with “Crazy World of Laurel and Hardy”. In 1969 I saw a double bill with my mother of 2 G rated epics “My Side of the Mountain” and “Hello Down There” but they tossed in a sneak preview of “Prime of Miss Jean Brodie"and Pamela Franklin was topless. The film was rated "M” today’s PG. My mother was shocked this with G rated films. Other doubles I remember seeing there were Play Misty for Me with Frenzy and Girls for Rent with Blazing Stewardesses.

In the mid to late 70’s the Circle was an adults only movie theater, all X rated except for Easter and Christmas weeks when they would bring in some G rated film like Mountain Family Robinson or Grizzly Adams. I don’t know if those last 2 were there for a fact but they were G rated live action nature films and not Disney, sort of like Pacific International used to release back teh.

Wow how brilliant. I love these photos, all of the old times when things were just sort of better. It looks really nice in that photo. tear Thanks for posting this!

My photos of this theater are at http://www.cinematour.com/tour/us/22284.html

Last movie I saw here was E.T when I was in the 6th grade. Used to go there all the time when I was young to see the latest Disney Movies with my Summer camp here & the American. Good Memories..

While living near Morrison and Westchester Aves. the Circle Theatre was one of the movie houses I went to, along with the Ward, Rosedale, Loew’s American and RKO Castle Hill. I remember that the Circle was fond of WWII movies during the 1950’s when I was a teenager. I saw The Sands of Iwo Jima there and was very sad when John Wayne got killed at the end. I also remember that there was a Chinese restaurant a few stores to the right of the box office.

I have been a Bronx resident my entire life and frequently went to the Circle. to which i never remember it ever showing “adult” films. can anyone provide a newspaper listing or photo to back up this claim?

I went to see The Rocky Horror Picture Show there midnight showing on Friday and Saturday nights many times.

The theater building is currently owned by PLC Church.

Any remnants of it’s former life as a movie house?