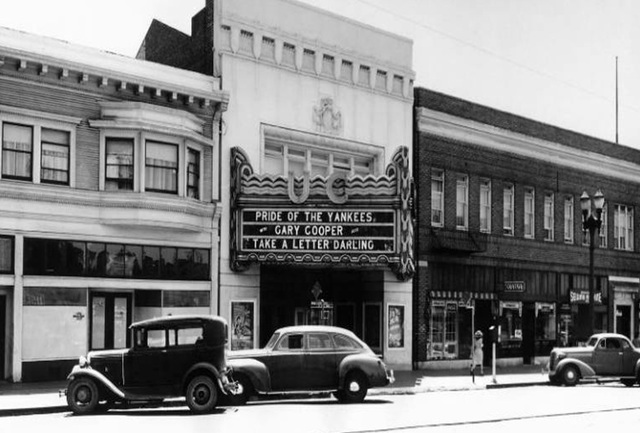 The UC Theatre was opened in 1917. The 1,300-seat UC Theatre closed in March 2001 after 84 years in business when the downtown art house was no longer able to survive on poor ticket sales.

An upcoming seismic retrofitting had been deemed too expensive by Landmark Theatres and its parent company, Silver Cinemas, which recently filed for bankruptcy. Already in debt and littered with unpaid bills, the UC Theatre could not afford the $300,000 retrofitting cost.

The only hope now is with the city of Berkeley itself, where the mayor is still looking into a plan to keep the theatre in business and, possibly, even renovate the structure.

Many local residents hope that Gary Meyer, who co-founded Landmark Theatres and ran the UC Theatre in the late-1970’s, will save the theatre and reopen it —a feat he accomplished with the Balboa Theatre in nearby San Francisco.

In March 2015, work began on a renovation/restoration project to convert the theatre into a live music venue which opened May 2016.

I’ve just uploaded a picture of the new marquee installed earlier this week, here is a link to the Berkeleyside article mentioned in a previous post, and this is a link to the nonprofit that will be running the UC when it reopens.

The status of the UC should be changed to renovating and restoring, work began last month to convert it to a live venue, mostly featuring music. March began with a seat giveaway on the 1st, those interested were invited to come and help themselves to sets of seats, take as many as you can transport. Individuals and local organizations and businesses took away about 500. By the following Saturday, all the seats had been removed and on the 15th, official groundbreaking ceremonies were held and construction began, no opening date has been set yet.

Here is an article from Berkeleyside about the groundbreaking and other info.

The UC will be run by the Berkeley Music Group, a nonprofit organization headed by David Mayeri, which has a website here with loads of info and an interesting drone tour of the theatre. They also have a flickr page with tons of pictures in 8 albums, including historical pictures and shots from the seat giveaway. Unfortunately flickr does not permit embedding links, so this one you’ll have to cut and paste, sorry about that..

After some electrical problems that caused the grand-reopening of the U.C. Theatre to be delayed, the theater is up and running with a solid schedule of live music. Plans include some film showings, festivals and a revival of The Rocky Horror Picture Show where the UC’s 22 year run was the longest continuously running engagement of any movie, anywhere.

Some photos of the first concerts http://www.theuctheatre.org/gallery/

And how do we show the theater as reopened here?

Here’s a clickable link to the Berkeleyside article and here’s the drone tour!

I took some pictures of the auditorium about an hour after the final seats were removed last March, I’ll look through them and perhaps upload a few.

I remember seeing 2001: A Space Odyssey there in 1980? … my 17th viewing of the film at the age of 17. It was one of the few revival theaters in the Bay Area that could do Kubrick’s classic justice with its huge screen and capable sound system.

We had magnetic sound and would demand prints with a mag stipe. Made for a fantastic sound experience. Check out www.EatDrinkFilms.com for some interesting articles on 2001. Another coming soon.

Used to love going there in the early-to-late 80s, when it was a revival house. Saw the Marx Brothers in Duck Soup with a full house. I laughed so hare, I thought I would pass out, several times! It was the first place I’d been that showed all three original Star Wars films in on order, in one day! Saw great films from some of the best filmmakers, from all over the world. Even got to see a few silent films, accompanied by live organ music! Having a baby is what stopped me from going and of course, home video killed the whole thing off, eventually. It was great in it’s day, though. I wish there were still revival houses. Seeing a film with a theater full of fans is a great experience.