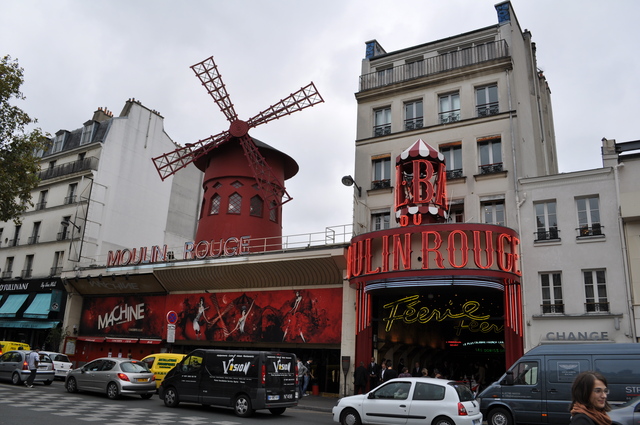 The Moulin Rouge was built in 1888. It burned down in 1915 and was not rebuilt until 1925. The new building included a winter garden, cabaret, and an Art Deco auditorium where Mistinguet did famous shows. In 1929 the theatre was converted into a 2,200-seat cinema which was operated by Pathe from 1930 until around 1935. Still operating as a cinema in 1940, it also sometimes had live shows as well.

Around 1950 a major refurbishing of the entire building created a cinema with 1,500 seats and a huge screen, a new cabaret named Locomotive, and under the movie theatre, a new cabaret Moulin Rouge with a seperate entrance (the actual floor show place).

In 1970 the Locomotive became a 600 stadium seating-style cinema called the Paramount Montmartre, which was triplexed in the 1980’s.

The 1,500 seat auditorium after a period of showing first run movies became difficult to run in the 1980’s, the beginning of the multiplex era in Paris. After a new policy showing 70mm prints on its huge screen, it closed around 1990. It is now a place to rent for fashion shows, movies, tv programs, and rehearsals.

The three other screens also closed around 1990 and became a night club named once again Locomotive. The famous cabaret Moulin Rouge uses the most important space in the building.

This monument is one of the most visited by tourists and with the movie of the same name, it is easy to identify this building.

The Paramount Opera Theatre address is 2 Boulevard des Capucines, Paris area 9. It opened in 1927 for Adolph Zuker’s Paramount Pictures. Seating was for 1,920 in stalls, mezzanine and balcony. The architect was Frank T. Verity who also designed the Plaza, Lower Regent Street, London, UK for Paramount Pictures in 1926 which closed in 2002 and has been gutted for retail and multiscreen cinema use. The state of the Paris Paramount when I was last there about 7 years ago was that it had been converted into 7 screens during the 1970’s. The largest (screen 3 holds 800) Screen 1 in the basement holds 400, Screens 2 & 4 hold 60 and 400 and screens 5, 6 & 7 range from 90 to 125 seats. The facade of the building was still impressive and there was some original decorative features in the large main entrance foyer.

In 2004 the Paramount opera is still alive but it has now strong rivals with the opening of big multiplex like ugc cinÃ© citÃ© les Halles,Bercy but the 800 stadium seating auditorium (ex balcony) with a wide screen and good sound keep a quality .

The July 13, 1935, issue of Motion Picture Herald noted quite a few new cinema projects planned, underway, or recently completed across the United States, which was in an accelerating economic recovery, but the news from economic laggard France was not so good:

“Ostensibly a summer closing move, the two largest halls of the Paris Pathe Natan Circuit now are dark, the Empire Cinema-Music Hall and the Moulin Rouge. The Empire (3,000 seats) had a combination cinema and variety policy and had been managed by Pathe Natan for one year. The Moulin Rouge (2,200 seats), former music hall where Mistinguett was a star, has been a cinema since 1929. It had been managed by Pathe Natan since 1930. The closing comes at a time when Pathe Natan is awaiting a general reorganization.”