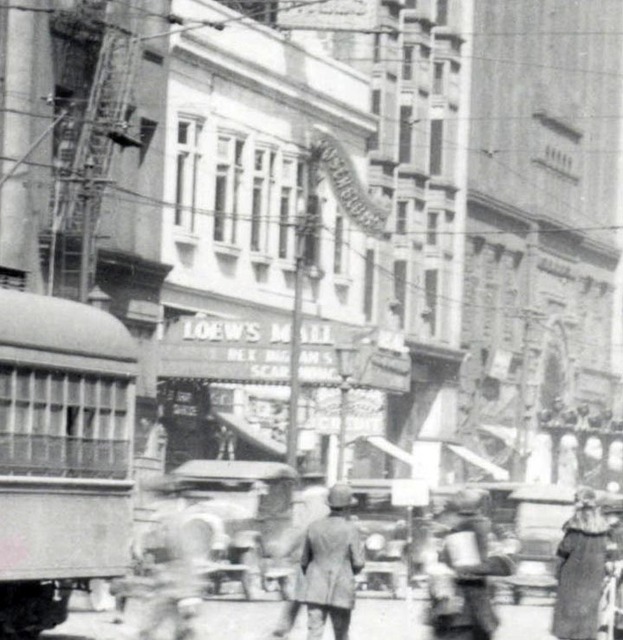 Opened in 1914 for films, with organs in each of its two auditoriums. Entrances on both Euclid Avenue and Superior Avenue E, with one auditorum directly above the other. Due to hill you would enter directly from Superior Avenue E into Lower Mall (600 seats, no balcony) and from Euclid Avenue into the Upper Mall (900 seats, one balcony). Possibly first duplex movie theatre.

Odd, I never heard of this theater till now. I guess I was too small when it closed to remember. It must’ve been the first theater on Euclid Avenue.

This building was not demolished after its closure, it was put to other use. I believe that the Euclid Avenue side was an S&H green stamp redemption center. That building had a large blank wall with a decorative sign that was probably 3 stories, which would be the sort of thing that would have replaced a theater. On the Superior side were several savings and loans, one of which probably absorbed the theater space on that side.

Was it called Loews Mall at one time?

Grand opening ad, “The Only Duplex Theatre Of Its Kind In The World"
from March 17th, 1917 is at
View link

There were at least two early theaters called the Mall in Cleveland. As shown in the ad to which Mike Rivest linked in the previous comment, the duplex Mall Theatre on Euclid Avenue opened in 1917. The earlier Mall Theatre was a smaller house located on Superior Avenue.

Here are a few relevant lines from an article on Cleveland movie houses published in The Moving Picture World, issue of July 5, 1916:

“Louis H. Becht, now owner of the Mall theater, Superior avenue, opened Dreamland, on Euclid avenue, which is the oldest downtown picture theater still in existence, in 1908. He was there two years when he opened the Mall where he now is.

“Now Becht is spending $100,000 on a new Mall, to be a duplex theater, each auditorium to seat 650 persons and have both entrances from Euclid avenue, which run parallel. This house will be ready for opening about Nov. 1. The present Mall, one of the most popular downtown houses, seats 300 persons.”As Mike’s ad is dated March 17, 1917, the completion of the house was obviously delayed. The 1917 opening also means that the Duplex Theatre in Detroit, opened in 1915, so far remains the earliest twin theater known to have operated in the United States. The claim to uniqueness made in the Mall’s opening ad could only have applied to its piggyback configuration. The Detroit Duplex featured side-by-side auditoriums.

I’ve found several references to this house as Loew’s Mall Theatre from the period 1920-1922.

if you navigate to the upper center portion of this large photo, the Euclid Avenue entrance to Loew’s Mall Theater can be seen circa 1927, the date of release for the movie being shown.

There is an article with a picture in Popular Mechanics May 1917 Page 735, which can be see in Google Books.

Direct link to the Popular Mechanics magazine of May, 1917. Scroll down to read p. 735