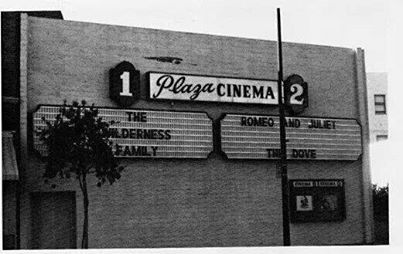 A short-lived downtown San Leandro duplex cinema, this was planned to be a part of the Jerry Lewis Cinemas chain, but they had gone out of business by the time it opened as the Plaza Cinema 1 & 2 on April 22, 1973 with Charlton Heston in “Soylent Green” & Liza Minnelli in “Cabaret”. It was closed on July 27, 1978.

Later converted into a bank, it is now partially occupied by a beauty salon/supply store.

This theater operated for a few years from about 1970-1976. It was mostly a second-run double feature house and (at that point) the only English language movie house in San Leandro. (The Del Mar was closed by then and the Bal was showing Spanish language films at that point.) The theater was an independent.