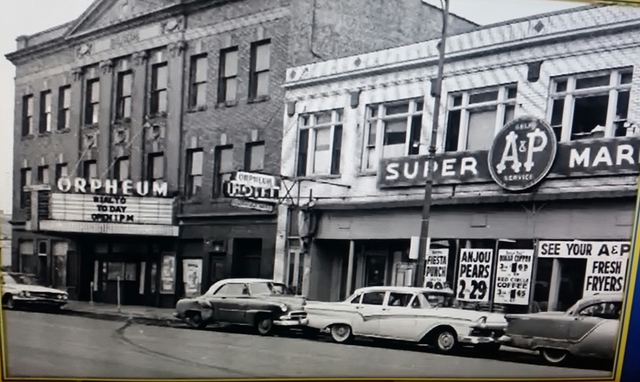 The Coliseum Theatre was opened in 1910. In 1911 it was renamed Orpheum Theatre. It was located on Chicago Street at Webster Street. It became part of the Chicago-based Balaban & Katz chain in 1949. The theater closed years ago, and has since been torn down. A bank is on the site today.

According to our records, the orpheum was part of the B and k chain as of october 1st, 1949. for more information please visit www.balabanandkatzfoundation.com

The Orpheum was a good size theatre with a balcony and was across the street from the White Store Department Store on Chicago Street. I saw some cool double and triple feature horror movies there and believe it closed around 1959.

Some of my Senior friends from Joliet Central High School were in the play “Arsenic and Old Lace”. That was the last I recall of any activity down there.

Also, I believe it was the First National Bank that set up a drive through facility there after the Orpheum was taken down.

Sad to see that era of theaters disappear.

At least the Rialto was restored. I wonder what happened to the Princess that was down the street a block south of the Rialto and of course the Mode just off Chicago Street west on Van Buren. I think the Mode was still there a few years ago back in the mid to late 90’s for special uses.

The Princess Theater in Joliet:

The Mode Theater in Joliet:

and photos of the Rialto as well:

Page 35 of Joliet, by David A. Belden (Google Books preview), has a photo of the Orpheum Theatre. The caption says that the house was built in 1910, was originally called the Coliseum Theatre, and was renamed the Orpheum in 1911.

A book of documents from Joliet council meetings in 1910 indicates that the proposed theater at Chicago and Webster Streets was to be built for L. M. Rubens. The 1912 edition of Stage Year Book lists the house as the New Orpheum Theatre, which means it was probably being operated by the Gus Sun circuit. Sun favored the name New Orpheum, and had a dozen or more houses of that name on his circuit.

The Coliseum/Orpheum was probably designed by local architect R. G. Hohen. An item in the July 2, 1910, issue of The American Contractor said that R. G. Hoeh [sic] had completed plans for the new Rubens theater in Joliet. Hoehn designed at least one other theater in Joliet for the Rubens Brothers, noted in the March 15, 1913, issue of the same publication. So far I’ve been unable to identify that theater for sure, but it might have been the Princess.