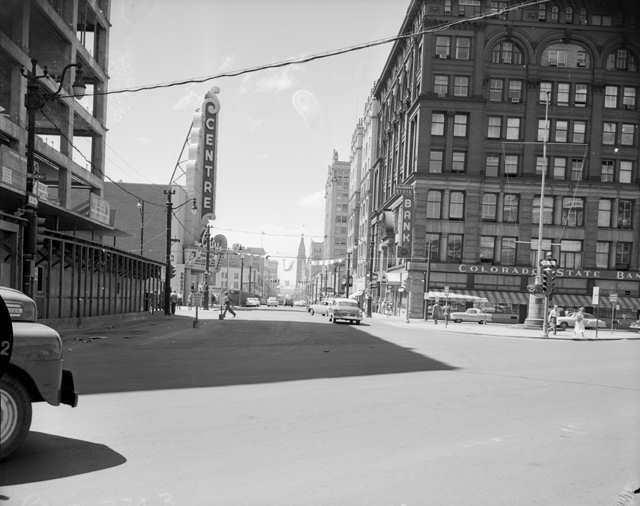 The Centre Theatre was opened on April 29, 1954, with the World Premier of “River of No Return” starring Marilyn Monroe, with Hollywood stars who appeared ‘in person’. It was built for the Fox Inter-Mountain Theatres chain. Seating was provided on a stadium plan, with a raised stepped section at the rear, rather than a conventional overhanging balcony. It was equipped with a 60 feet wide curved CinemaScope screen. It was closed June 30, 1980 with “Star Trek - The Motion Picture” & “Alien”.

This theatre is one of some 200 that could be described as “Skouras-ized For Showmanship” which is the title of the ANNUAL of 1987 of the Theatre Historical Soc. of America. In the late-1930’s through the 1950’s, there occurred on the west coast of the United States a phenomenon known as the ‘Skouras style’ in recognition of the oversight of the Skouras brothers in their management of several cinema chains. They employed a designer by the name of Carl G. Moeller to render their cinemas/theatres in a new style best described as ‘Art Moderne meets Streamlined.’ The then new availability of aluminum sheeting at low cost was the principal material difference to this style allowing for sweeping, 3-dimensional shapes of scrolls to adorn walls and facades in an expression that would have been much more expensive and not at all the same in plaster. With the use of hand tinted and etched aluminum forms, the designers could make ornaments in mass production that allowed much greater economies of scale. The ANNUAL also show in its 44 pages how some 20 theatres were good examples of this combining of aluminum forms with sweeping draperies heavily hung with large tassels, and with box offices and facades richly treated with neon within the aluminum forms. Few of these examples survive today, but it was a glorious era while it lasted, and this collection of crisp b/w photos is a fitting epitaph by the late Preston Kaufmann.

In and around 1956 my Dad was one of three managers of the Centre. The manager was Bob Sweeten and my Dad was the “house manager”. I was 12years old and he hired me to work as a page boy, which meant I removed cigarette butts from the sand urns and carried around a broom to sweep up trash. The Centre was the flagship of the Fox theater chain. The ushers and usherettes were hired from Lowry Air Force base and so there was a great deal of pride in the appearance of the staff. Managers wore tuxes and the ushers and usherettes uniforms were immaculate. What a beautiful theater it was!

re: Jim Sutton… yes, I remember Jim well. (at least I think it was Jim Sutton. I read Rich’s note too and now I’m unsure, but this is what I remember… perhaps he worked both theatres?) Anway, I was in college at CU Boudler and worked full time at Centre Theatre in the summer under Jim and then later when the semester started up on the weekends. I only worked about a year.. this would be around ‘71-'72 thereabouts.

I really-really liked him as a manager. He was efficient, kind, fair and treated everyone with respect. He was a coin collector and I still have a few two dollar bills and a couple of five dollar silver certificates that he allowed me to swap out for cash. I promised him I would never spend them and I haven’t to this day. I think of him everytime I take them out.

In a way, I’m hoping that Rich is wrong only because I’d rather not think of Jim as not being aorund any longer. He was such a great guy. No matter what, I’ll always remember him with fondness.

I have fond memories of the Centre. I worked as an usher one year shortly after graduating from Lakewood High School in 1958. Sleeping Beauty by Disney was playing along with the Grand Canyon Suite. The lines wrapped around the corner. One line was on the east side of the theatre to buy tickets then ticket holders had to join the line on the west side of the building. My job was to make sure people were standing in the correct line. I would stand and say, in a loud voice, “this line is for people who have their tickets, if you do not have your ticket please join the line on the east side of the theatre”. After awhile everyone would join in and give the speech with me. We wore fancy uniforms like we were the palace guard. I believe the manager was Mr. Sweeten and the assistant manager was Mr. Goodenough. We were all young, good friends and good parties. John Osse

unusual design. inside and out. saw Gone With the Wind for the first time in the seventies.sorry to learn it was demolished. 16th St had several old movie palaces and I’m sure they are long gone.

April 16, 1954 photo added with below copy. Credits at bottom. The grand opening of Fox-Intermountain’s new Centre Theatre will be April 29 with the world premiere of “River Of No Return” The theatre will seat 1,247 persons. Photo By Cloyd Teter/The Denver Post via Getty Images. Copy credit The Denver Post.

The Centre’s last shows were Star Trek : The Motion Picture and Alien on 6/30/80. I am putting together a series of books on the history of the Denver area’s theatres and drive-ins (including a full booking history of the Centre.) If anyone has any questions on the subject, please get in touch with me at kennyjames007inbox.com. I’ll be happy to share my research with you. Thanks – Ken Mitchell.

I recently read an article that stated on Sept. 4, 1959, MGM and William Wyler choose the Center Theatre in Denver to show the first sneak preview of BEN-HUR before it’s premiere in November in New York. Can anyone verify this story?

TCM’s Ben Hur page says there were sneak previews in Denver, Dallas, and San Diego. They don’t give the names of the theaters, or the dates, but the Center would have been a likely choice. The reels would have been flown to Denver, then to Dallas, then to San Diego, then taken back to Culver City.

The Center’s ad for that day probably would have announced a sneak preview that night, but the name of the film would have been withheld, since that’s the point of a sneak preview— the audience (except for studio employees sent to observe audience response) wouldn’t know in advance what they would see. It might have been mentioned in the paper the next day, though.

As a veteran of Denver’s late, wet snows, I was amused to discover that the Centre opened during a snowstorm according to the Motion Picture Herald of May 8, 1954. The Wadsworth Drive-In, scheduled to open May 1, “was forced to postpone the opening a week because of the big snowstorm hitting Denver last week, right in the midst of the opening of the downtown deluxe 1,247-seat Centre.”

I’ve put together a booking history for the Centre, from 1954 up to 1978 so far, in case anyone might like to know when a particular movie played there. I’ll be happy to share my research with you. Take care – Ken Mitchell ()