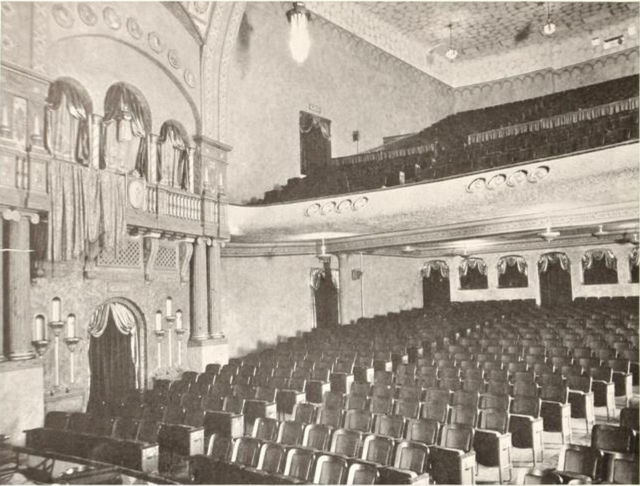 The Babcock Theatre opened as a live playhouse theatre on December 23, 1907. This theatre is one of some 200 that could be described as “Skouras-ized For Showmanship” which is the title of the ANNUAL of 1987 of the Theatre Historical Soc. of America. In the late-1930’s through the 1950’s, there occurred on the west coast of the United States a phenomenon known as the ‘Skouras style’ in recognition of the oversight of the Skouras brothers in their management of several cinema chains. They employed a designer by the name of Carl G. Moeller to render their cinemas/theatres in a new style best described as ‘Art Moderne meets Streamlined.’ The then new availability of aluminum sheeting at low cost was the principal material difference to this style allowing for sweeping, 3-dimensional shapes of scrolls to adorn walls and facades in an expression that would have been much more expensive and not at all the same in plaster. With the use of hand tinted and etched aluminum forms, the designers could make ornaments in mass production that allowed much greater economies of scale. The ANNUAL also show in its 44 pages how some 20 theatres were good examples of this combining of aluminum forms with sweeping draperies heavily hung with large tassels, and with box offices and facades richly treated with neon within the aluminum forms. Few of these examples survive today, but it was a glorious era while it lasted, and this collection of crisp b/w photos is a fitting epitaph by the late Preston Kaufmann.

Thursday Night Fights are still going on at the Babcock. Status should be open. Function would be…live performances?

Had a complete remodel in 1928 in the Colonial Spanish style at a cost of $100,000. Was then owned and operated by the Theatre Operating Company of Billings, Max Fregger & Eugene O'Keefe. Seating capacity was nearly 1,500 persons.

The NRHP registration form for the Babcock Theatre (PDF here) has a detailed history of the theater and numerous photographs, including photos of the original 1907 interior designed by Edwin W. Houghton and of the 1927 interior with decoration in the Spanish Colonial style by Carl F. Berg of the Shearer studios in Seattle. The theater was closed from June 7 to September 24 for the 1927 remodeling project.

The architect for these major alterations, which included moving the theater entrance from an interior arcade to the street front, and the removal of the 300-seat gallery and the boxes, was not named in the document, but it might have been John G. Link, who did work on the building at some point according to this page from the Montana State University Library.

On the night of February 21 and morning of February 22, 1935, the Babcock Theatre was severely damaged by a fire that caused the roof of the auditorium to collapse. The Wutlizer Hope_Jones organ was destroyed. Reconstruction after the fire took almost six months. The rebuilding project was designed by local architect Edwin G. Osness. The decoration, in the Art Deco style, was by the Heinsbergen Studios of Los Angeles.

The Skouras-style remodeling for Fox Theatres, designed by Carl G. Moeller, which is still largely intact, was done in 1955.