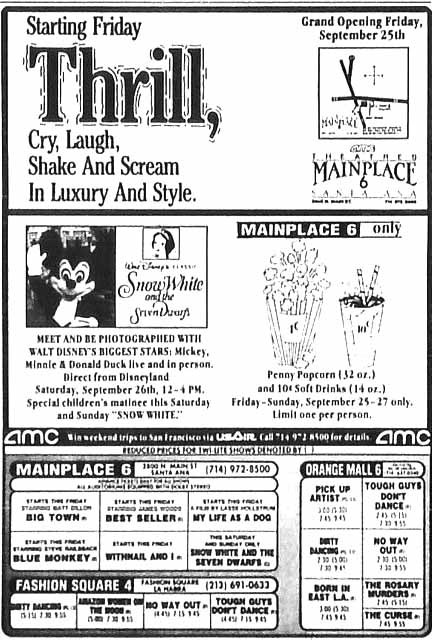 The theatre was opened by AMC September 25, 1987, and was part of a brand new mall re-development, Santa Ana Main Place Mall. The box office is located on the second floor of the food court at one of the main entrances to the mall. The theatre concessions and auditoriums are directly above on the third floor. The theatre was built with 2 THX auditoriums and then later installed with SDDS sound systems.

The theatre lobby is broken up into with a small bridge and sitting area in between. Originally the theatre had two complete functioning concession stands but only one was ever needed almost 99% of the time. The two larger auditoriums were on the north side and the two lobbies broke up the theatre with four smaller houses on the south side.

The theatre did do some business back in the early to mid-1990’s but never could gain box office consistent blockbusters due to competition in the area.

Since October 2006, it has been operated by Picture Show Entertainments.

Picture Show Entertainment has scheduled a 10/20/06 opening for the theatre. The second concession stand has been torn out and the area has been converted in to a rental/party room. They’ve also replaced the auditorium wall coverings, replaced projection/sound equipment, cleaned the complex, and fixed minor cosmetic issues.

The mangers are useless there I tried to contact one and they didnt respond. Luckily, one of the ushers was there to resolve my problem. I am a recent customer and everytime I go I always see the managers with long faces like if they hate their jobs. And thats not how a manager should be protayed. They should get new management because they are not reliable and they do not know how to do their job. I also wanted to point out that one of the concessionist has to work on her attitude, she was really rude to me when i asked her information involving a movie. But some positives are the theaters in good condition, who would of thought you can enjoy a movie at a friendly environment for only two dollars. And also the young men at the podim are very polite, and friendly.They always greet me with a big smile and a warm hello. It seems like these young men enjoy their jobs which is always a positive. The managers should be more like them. I would love these young men to work for my in my corporation.

I saw BIG at this theater during the summer of 1988. It was nice and new. The layout was a little different. It was an AMC, I believe.

My favorite memory of this theatre was when I saw Martin Scorsese’s “The Last Temptation of Christ.” It was an AMC then and this was one of the very few theaters in the area willing to screen the film. Side Note: I made a student film at the time that dealt with the protests the film was getting during its initial release. Somewhere in a closet I have footage of the theater’s exterior marquee, which listed the film’s title.

There is a large conference room located off of the projection booth for the four smaller auditoriums. During the theatre’s AMC years this room was utilized for management seminars and regional meetings. The room also had a small cubicle situated in the corner which the regional marketing director worked out of.

The projection booth for the two larger auditoriums features two adjacent rooms which were the AMC regional manager’s office and an office for regional administrative staff/auditors. In the early 1990’s AMC merged regional offices into a larger division office (located in Century City) and the former regional offices were basically subjugated to storage. This space was later utilized as a home base for the Block 30 management team during the Block’s construction/pre-opening.

There is a spacious storage room located off of the utility corridor that runs behind the two large auditoriums. AMC utilized this room to store defunct equipment, paperwork, and misc marketing materials from the regional days. Even in the late 90’s, long after the regional offices had closed, the room was still piled from floor to ceiling with regional garbage.

During the megaplex/stadium seating boom of the late 90’s plans were drawn up to add auditoriums and upgrade facilities. However, this plan was quickly dropped once the Block project was lined up. After the Block opened AMC sought to convert Mainplace to discount bookings, but the mall didn’t feel that fit with their image at the time (obviously this changed a few years later). So, AMC finished out their lease as a pseudo art house, with occasional children’s films and studio test screenings (auditorium #5 was equipped to run work prints of films and was frequently booked by Disney for audience tests).