I finally found some information on this old theatre after extensively searching the web and getting nowhere. By luck, I found mention of this theatre while going through the South Bend Civic Theatre’s website. It turns out that a downtown development firm called Downtown South Bend, Inc. owns the old Avon building and is either giving it or selling it to the South Bend Civic Theater group.

Sadly, it sounds like the South Bend Civic Theater group is going to raze the Avon Theater and build two new theatres on the spot including a little 100-150 seat theatre and a larger 300 seat theatre. At least they’re using the land for a theatre, though. I emailed the director of the South Bend Civic Theater group and he provided me with this information. I also learned from him that the Avon Theater does have a newer roof and one re-enforced side wall but that the interior is in lousy condition.

The Strand Theatre opened on May 12, 1926 with May McAvoy in “"The Road to Glory”. It was equipped with a Kimball organ. It was originally built as a movie house, was outfitted for sound in 1929. On October 12, 1949 it was renamed Avon Theater following refurbishment. On April 17, 1958 it was renamed Avon Art Theatre. On October 24, 1975 it was renamed the Mall Theatre. It ceased operations as a theatre on January 25, 1979. It remained vacant until November 2012, when it was demolished. The terra cotta façade was saved to be used in another building.

The current plan for the AVON Theatre building is for the South Bend Public Library, in the same block. Will purchase the building and raze it along with surrounding buildings for an expansion and parking garage facility. The plan has been delayed currently due to funding issues within local government tax roles. You can read about some of these plans in the public report…
View link

here are 2 recent photos of the Avon:
View link

The Avon was an upscale “art” theatre (spelled with a terminal “-re”) while I was an undergraduate at Notre Dame in the 1950s. It mostly showed “foreign films,” not regular movies. It aimed to attract patrons who would not condescend to visit the many other theaters in town — and it largely succeeded, which is why only professors and snobs knew it was open for business. Its regular clientele consisted of folks who liked to imagine they were in New York or Paris. If an ND undergrad’s date was a foreign-language or fine arts major from St. Mary’s College, he might suffer going there too, occasionally. :–)

Does anyone have any updates about the fate of this theatre. I remember it as a kid growing up in South Bend in the 60’s as being that place that my parents would hurry by for fear I would ask what the movies they were showing were. I seem to have a vague memory of one of them being “I am Curious (Yellow).” Would love to hear any updates!

Iâ€™m not certain when it officially closed, but it was still in operation in 1972.

rpatnaude, Who were you in contact with about the property? It seems the city still owns it. I think the Library is to broke to make a parking lot right now, but who knows. It is a great location, and I am interested in reopening it.

Update on the Avon: Looks like it is going to be destroyed by the new owners. The St. Joseph County Library bought it and is going to level it for a parking lot. The community has tried to stop them, but I don’t think it will be saved. There is a FB group: Save the Avon Theatre downtown South Bend if you would like to follow.

The Avon Theater was demolished in November of 2012. Luckily, the Terra-cotta portion of the from facade were saved for reuse on or in another building. 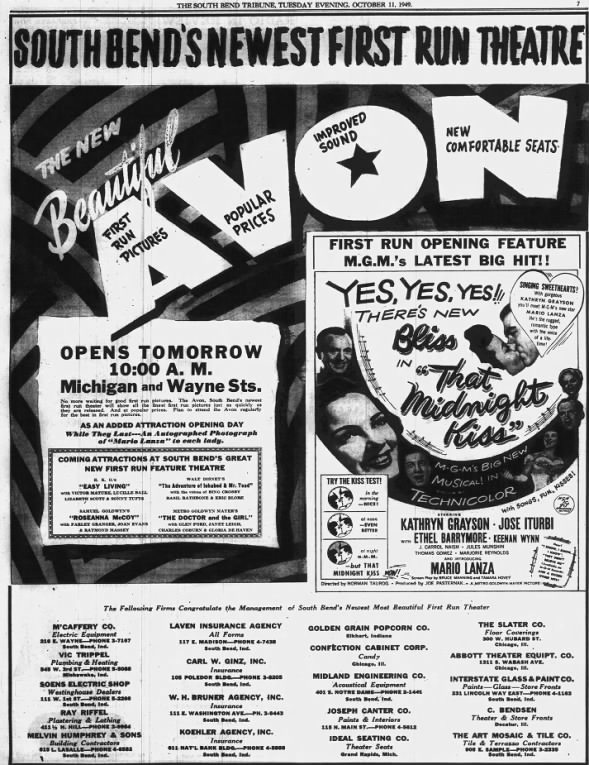 As noted above, the Strand Theatre was rechristened the Avon in 1949. It later closed for a three-month period in 1958 (from January 13 – April 16) and reopened on April 17 as the Avon Art Theatre, following an art-house trend that was occurring in larger cities around the country. A South Bend Tribune article noted that the former Avon had been “remodeled and refurbished” and that a “Parisian sidewalk café coffee bar is being installed and free coffee will be served at all performances.”

Over the next decade, the theater drifted away from art-movie programming and finally dropped the word “Art” from its advertising in mid-1972.

In 1975, the venue was renamed yet again – this time as the Mall Theatre, by virtue of its location on a recently created pedestrian mall (the River Bend Plaza) in downtown South Bend. The Mall Theatre was unveiled on October 24, 1975, having undergone “extensive interior renovations” that included “carpeting, painting and new seating,” as well as removal of the overhanging marquee that had been in place since 1949. The theater’s first feature under its new name was the 1939 classic “The Hound of the Baskervilles.”

The Mall Theatre showed a variety of movies and was by no means exclusively X-rated. It stayed open for a little more than three years, finally closing its doors the evening of January 25, 1979 (after a double-feature of “Up in Smoke” AND “Superfly T.N.T.”) That day’s newspaper ad encouraged readers to “watch for announcement of re-opening,” and the theater was listed for about three more weeks as “closed temporarily,“ but then the ads stopped and the theater never reopened.

At some point, the building’s interior was mostly gutted and the property became a storage space. It continued to deteriorate as the years passed, with mounting renovation costs discouraging the several potential buyers who expressed interest in reopening it as a movie theater or even a live performance venue. (One interested party was the reputable South Bend Civic Theatre, which had been looking for a permanent downtown location.)

Finally, after sitting dormant for 28 years, the decaying structure found a buyer in 2007, when the St. Joseph County Public Library purchased it as part of a proposed expansion plan. Another five years passed before the library announced plans to demolish the building -– triggering the Historic Preservation Commission of South Bend and St. Joseph County to petition the South Bend Common Council for landmark status for the old theater. The Commission’s request postponed the demolition by several months, but landmark status was ultimately denied, on the grounds that the property was structurally unsound and that renovation costs would be prohibitive.

However, in a gesture of goodwill, the library agreed to cover the $69,000 cost of removing -– and delivering to the Commission — the decorative terra cotta tiles on the theater’s façade.

With that last bit of business complete, demolition of the former theater began on December 16, 2012, and was completed in 2013.