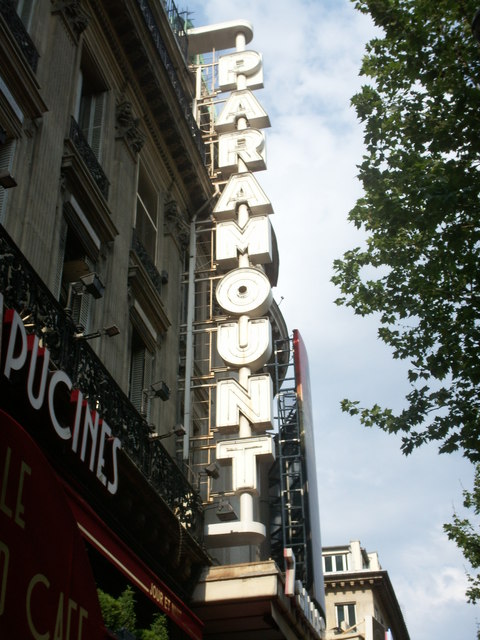 Built on the site of the Vaudeville Theatre at the corner of Boulevard des Capucines and rue de la Chaussee-d'Antin. The Vaudeville Paramount Palace opened on 24th November 1927 with Merion C. Cooper’s documentary “Chang:A Drama of the Wilderness”. It was designed by British theatre architect Frank T. Verity, who had also designed the Plaza Theatre, Lower Regent Street, London, UK for Adolph Zukor’s Paramount Pictures in 1926. Associate architect was Auguste Bluysen.

The Paramount Theatre had an original seating capacity of 1,920 in orchestra, mezzanine and balcony levels. It was equipped with a Wurlitzer 2Manual 10Ranks theatre organ which was opened by British organist Reginald Foorte. The stage was 12 meters wide and 8 meters deep. The orchestra pit could accommodate 35 musicians and was on a lift which could raise it to stage level. The cinema was split into seven screens during the 1970’s and at that time the Wurlitzer organ was removed, said to have been scrapped. The largest (Screen 3) holds 800, other screens have capacity’s ranging from 400 down to 125, 90 and 60 seats.

In 2007, the cinema underwent a renovation and was taken over by Gaumont Pathe and was renamed Gaumont Opera-Paramount Opera. Renovation of the 7-screens was completed in July 2008 and it became the Gaumont Opera Capucines.

By October 2009, it had been renamed Gaumont Opera and the seating capacity was 2,187. By 2018 it had been re-named Gaumont Opera - Cote Capucines with a reduced seating capacity of 2,094. It was closed on 16th October 2019 for a renovation to be carried to the plans of architect Renzo Plano, which has gutted the interior and will provide a gastro restaurant and bar on the top floor of the building. It is planned to re-open in 2024.

The Paramount Theatre opened on 24th November 1927 with the Merian C. Cooper/Ernest B. Schoedsack production of the Paramount Picture “Chang”-epic of the Jungle. It was preceeded by the Paramount Orchestra playing the Overture the The Mastersingers by Richard Wagner, a Paramount ‘Actualites’ short documentary “Les Yeux du Monde”(Eyes of the World), a Max Fleisher ‘Out of the Inkwell’–‘KOKO’ cartoon, English organist Reginald Foort at the Wurlitzer 2Manual/10Rank theatre organ and a stage production by Leonce Perret starring Hope Hampton, Jaque Catelain and Gina Manes in “Printemps D'Amour”(Spring of Love).

In an American trade journal (possibly Better Theaters) there is an article dated June 2nd 1928 titled ‘The Finest Theatre in Paris’. Describing the building and it’s construction it is stated that:–

‘It was built by French engineers after plans by R.E. Hall & Company of New York, architects and surveyors of several notable theatres in this country.(USA) The construction and design was carried out by Frank T. Verity of London, designer of the Plaza and Carlton theatres there and Auguste Bluysen of Paris. Major Charles H. Bell of London was the engineer in charge of the electrical installation.

The main entrance opens on a grand domed foyer in a conservative Modern French style(early Art Deco), while the auditorium design is in an Italian Renaissance style. The seating plan is orchestra, mezzanine and balcony with just over 1,900 seats distributed over three levels'.

Here is an entire PROGRAM BOOKLET for the end of 1928, listing current and coming attractions, both films and vaudeville acts, including Maurice Chevalier.

Here’s another original program from the Paramount from March, 1928.

The refurbishment here is complete and all 7 screens are open…the integration with Gaumont means that big films in “Version Originale” are now opening on the neighborhood’s biggest screens…my local for nearly 2 years in Paris with among others Poseidon, The Kingdom and Rambo in French, No Country for Old Men in English, and a lot of popcorn for evenings in my office nearby…a generally higher quality of welcome and more grand experience than newer build multiplexes…lives up to its proposed grandeur

An interesting article in Boxoffice of August 17, 1946, recounts some of the story of the Paramount Theatre during the occupation of Paris by the Nazis. The scan is a bit blurry, but after clicking on the magazine image to enlarge it, you can click on the + sign in the bar that appears above it to enlarge further and most of the text will be fairly readable.

Articles in French on the Silverscreens site.