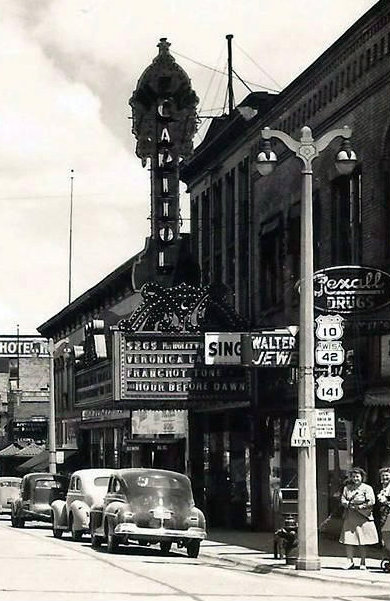 Opened on June 16, 1921, the Capitol Theatre was originally a venue for vaudeville and movies, later turning to movies only. It was equipped with a Barton 2 manual organ. The theatre was closed in 1987 but later restored and reopened later that same year as the Capitol Civic Centre. The Capitol Civic Center now hosts live stage entertainment and other various performing arts.

Here is a 1964 ad from the Manitowoc Daily Herald:
http://tinyurl.com/ykayze

Although I am not sure if there is still a screen at the Capitol, there is still a projector and platter system in the booth. However, I doubt it is still functional. I know the Strand used to go to the Capitol for spare parts when their stuff would break down. There was also a trailer for “Crocodile Dundee 2” amoung the debris in the projection booth. Given that movie’s release date (May 1988), it might still be there from the active days of the theatre.

(Manitowoc Herald-Times, Wednesday, March 28, 1951)
A Challenge to Parents
Vandalism of Teen Agers in Theaters, Buses Gets Worse
How can youthful vandalism in theaters , buses and public places be curbed in Manitowoc?
This is the question now confronting law enforcement officials as a result of continued depredations, which are getting worse instead of better. The damage is running into the hundreds of dollars.
Worst instances of the acts of teen agers have been in two Manitowoc theaters, the Capitol and Strand. Seats have been cut open, initials carved in walls, and sides cluttered up with initials and markings with red lipstick.
Manager R. S. Guiterman of the Capitol estimates that in the last five months over 150 seats have been damaged. Some are almost beyond repair. Repair bills run in excess of $3 a seat.
At the Strand almost as many seats have been damaged along with deep gashes cut into the side walls with sharp instruments. Even the rest rooms are not immune. Conditions have become so bad in the movie theaters that the management is considering discontinuing the use of student tickets. By these tickets the students gain admission to theaters at a reduced price. Making the teenagers pay full fare, managers believe, might tend to stop this vandalism . Those who pay the full price for a movie usually go there to see the picture and not to cause damage.
The rear wall on the mezzatiine floor of the Capitol theater is an example of the lengths gone to by the teen agers to mark up the painted wall. Some of the markings are so high on the wall those guilty must have stood on the seats to do their marking. Bright red lipstick was the principal item used to mark up the walls.
New pushback seats in the Strand were the particular target of the pranksters. Many of the seats are so bad they cannot be used and will have to be replaced with new seats. Real problem, of course, is to catch the guilty persons in the act of vandalism. Ushers patrolling the aisles are not able to detect the guilty ones.
Closing off the mezzanine and balcony of the theaters is one proposal but in nights when there are big crowds, particularly during the week end, this also poses a problem.
Parents might be the answer. They might do a little detective work right at home and find out if their sons and daughters went to the theaters to see the movies or to work havoc to the furnishings.

This item from the June 17, 1920, issue of Engineering News-Record is the earliest item I’ve found about the Capitol Theatre:

The November 4 issue of the same journal noted that contracts had been let for the somewhat altered project:

Plans were apparently altered again before completion, as in its final form the building had only three storys.

Architect William J. Raeuber was practicing in Manitowoc at least as early as 1900. In 1906 he provided the plans for a remodeling and expansion of the Ceske Slovanska Lipa Opera House (one of two opera houses Manitowoc then boasted) at 411 N. 8th Street. The Opera House also showed movies from time to time before being converted into a dance hall.