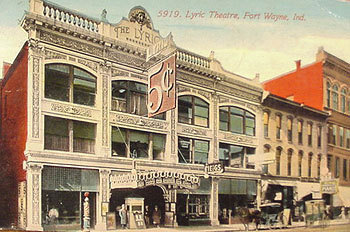 Originally opened as the Lyric Theatre October 12, 1908. By 1929 it was operating as the Riley Theatre. Around 1942 it was renamed Wayne Theatre and was still open in 1955, but had closed by 1956. Since demolished the downtown Hilton Hotel now stands on the site.

That link is long gone. The theaters in Fort Wayne on 11/5/22 were the Lyric, Jefferson, Orpheum, Strand, Palace, Hippodrome, Creighton, Transfer and Grand.

The Wayne theater at 1014 South Calhoun was opened in 1941 by Maller Theater Circuit.
It was first opened about 1908 as the Lyric, however Mallers bought
the theater, and promptly changed its name to the Riley.
They decided to again change its name, this time to the Wayne, which was very popular during it hey-day.

From the early 1900s a postcard view of the Lyric Theatre before it became the Wayne.

The Lyric was built in 1908, according to a history of Fort Wayne published in 1917. Originally a vaudeville house, it had been converted to a movie theater by the time the book was written.

A book about Fort Wayne published by the Fort Wayne News in 1913 attributes the design of the Lyric Theatre to one of the town’s leading architects of the period, John M. E. Riedel. He also designed the Empress Theatre.