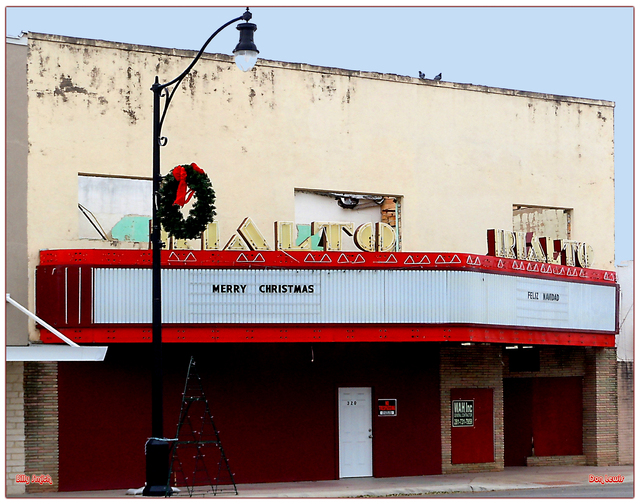 This theater is in very bad shape. Not sure how old the original building is, but the facade looks like late-1940’s to mid-1950’s. The marquee is falling apart, and the entry has been boarded up.

In April 2013, it was being converted into office and housing use.

SiliconSam, do you have a link to provide for your architecture pictures? I’m very interested in seeing them.

Good luck, Rialto Theater. Hopefully things work out in the best interest of the location.

“Remodeling of the old Rialto Theatre was completed this week by Hall Industries and the opening set for June 10, it was announced by Boyd Atkinson, local Hall manager. The house name, however, will be changed to ‘The Rex.’ New upholstered chairs and projection equipment are to be installed.”

The Rex is mentioned again in the April 5, 1941, issue of Boxoffice, which says:

“BOXOFFICE has been informed that the building formerly occupied by the Rialto, Kenedy, is being remodeled to serve as a cafe, according to its owner, August Loos of that city. The only other theatre in Kenedy is the Rex.”

But by 1958, Boxoffice is once again publishing items about the Rialto Theatre, and I find no mentions of the Rex after 1941. Possibly the Rex resumed its former name. But the Rialto was probably the nameless theater mentioned in a May 2, 1936, Boxoffice article about Henry Hall, which said:

Motion Picture Times of March 11, 1930, listed the Rialto as one of the Texas theaters which had recently installed RCA sound equipment. As near as I can figure from these various items, there have been two Rialto Theatres in Kenedy, but the lack of follow-up items to so many Boxoffice articles about the town leaves their history somewhat ambiguous.

I’ve also found these bits about other theaters in Kenedy: The April 20, 1940, issue of Boxoffice said: “Jack Farr has just opened the new Bear in Kenedy, Texas.” That’s the only mention of the Bear I’ve found.

Motion Picture Times of May 13, 1930 said: “B.F. Mumm, who lost the Grand at Kenedy by fire, starts this week to rebuild the theatre….” The fire had taken place in March, according to an earlier issue of the magazine. A 1948 “From the Boxoffice Files” feature cited a 1928 item saying that B.F. Mumm had purchased the Grand Theatre in Kenedy. Aside from that retrospective item, I’ve found no mention of the Grand after 1930.

Hey All, I am the new owner of the Rialto Theater in Kenedy Texas. Please view my website here that shows how I am raising money and interest in getting the Rialto back up and Running. www.savetherialto.com and our facebook page which is updated daily.
View link

Plus I am selling the old arc projectors if anyone is interested.

We have started the cleanup process of the rialto. Soon we will gutting the lobby area to prepare to roof the front section. If you care to donate to our roof fund please vist us at www.savetherialto.com We will soon be applying for a non profit status and you will be able to get a tax deduction. thanks for the support and for daily updates visit our facebook page Save the Rialto of Kenedy tx.

Non-profit is probably not going to happen anymore. We are starting to gut the lobby to prepare it to be roofed. It wont be roofed soon, but its a start.

Hopefuly someone can save this.I love the Marquee.

Here’s another mention of a theater in Kenedy from the trades, this time from the July 1, 1927, issue of Film Daily:

“Kennedy, Tex. — Hall Industries, operating a chain in this section, has opened the Kentex, its second local house.”I’ve been unable to discover if the Kentex Theatre was the house that later became the Rialto, or if the Rialto was the other theater Hall was already operating in Kenedy in 1927, or if it was a third theater.

The Rialto is being saved, but not as a theater. According to a San Antonio Express News article, the building is being remodeled into offices and living areas. Houston developer Walter Chance purchased the building.

In this link, photos 16 and 17 show the interior work being done on the Rialto.

From Kenedy a photo of the Rialto Theater.