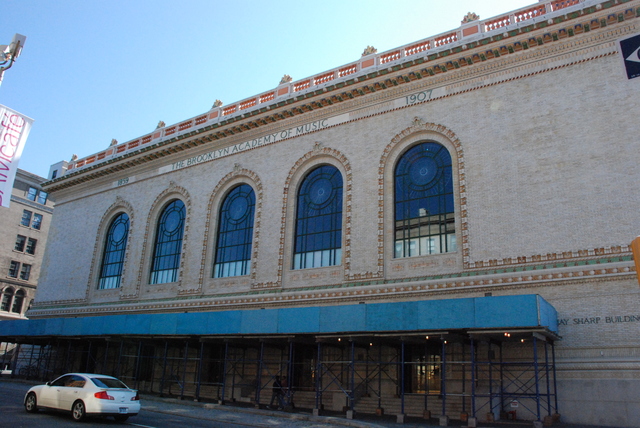 The BAM Rose Cinemas at the Brooklyn Academy of Music opened on November 12, 1998 and feature four screens of first-run and repertory art house programming. The seating capacity was 1,400.

Located in the former concert hall of the historic 1908 built, Brooklyn Academy of Music performing art center, the BAMcinematek series is one of its most popular, featuring filmmaker retrospectives and other screenings.

vindanpar-it happened twenty years ago. I don’t understand why this is only now coming to your attention.

It’s not just coming to my attention.

It just infuriates me that people have anything good to say about it. This was a great stage theater. And showing films is fine as long as the theater is basically kept intact. Nice to see a blockbuster playing here! I mean come on.

Vindanpar… sometimes we just need to be thankful for what we have left. Would you have rather seen the entire room gutted to bare brick and converted to office space? Nice to see a big movie playing here that will bring crowds and keep the theater viable for its owners.

What’s the point of saving a beautiful theater if they are going to turn it into a multiplex? I get no pleasure from seeing this kind of nonsense. Honestly tearing it down would have been the same thing. You people have got to be kidding praising this in any way. Nice to see a comic book movie playing in a fraction of its space when I had some of the greatest theatrical experiences of my life here? You clearly did not experience what I did. Otherwise this stupiddagine would make you angry. Like a believer seeing St Patrick’s desecrated.

So since you’re referring to my comment from February let me just say a few things:

They didn’t divide that one up. That’s the theater that Black Panther played in, so it didn’t play in “a fraction of the space” but in a large, over-a-century-old 800+ seat auditorium.

Jeez Louise, the main stage opera house is untouched, but the smaller concert space was carefully and tastefully converted into four screens, two upstairs,and two downstairs. It was hardly haphazardly “cut up” like so many big movies houses were back in the 70s and 80s.

I don’t recall much theater being performed in the concert hall, or at BAM in general, but they do have other spaces now for theater and other live performances, including the restored Majestic Theater and a few smaller spots.

I have been in the main stage opera house MANY times but the former Carey only once. I don’t recall the latter as being more than a utilitarian space. And, there is no need to go to the site proffered by digital for the BAM Harvey when you can get it’s full history right here on CT from the days when it was the Majestic and had double the seating capacity that it does now.

Let me put my two cents in here, Mr. Vindanpar. The complete theatre exists behind the walls built forward on the sides and front of stage downstairs. The top procenium of theatre is viewed in the upstairs front stadium cinema and the entire ceiling details are seen in the entrances on both sides upstairs while the cinema ceilings of both upstairs cinemas are painted dark colors but the details can be seen. What I am saying is should the death nell happen to movies in the next ten years, the BAM Rose Cinemas can be put back intact as it was with the alterations removed. The theatre exists like the Loew’s Paradise in the Bronx which was twinned, tripled and quaded before it closed and is now is in it’s original 1929 opening single auditorium. Loew’s covered the original decor and was sensitive in its conversions and that’s why the Loew’s Paradise is a prime example for the BAM Rose Cinemas to follow.