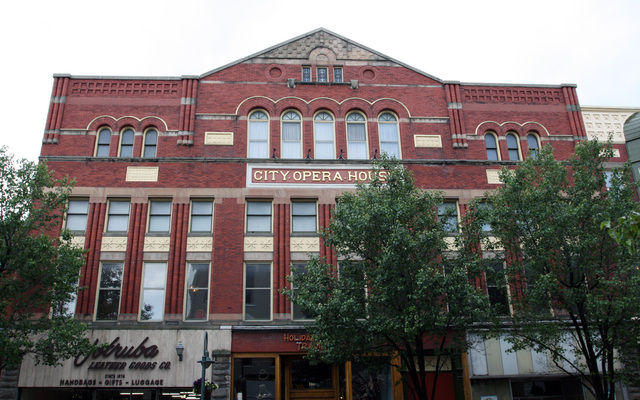 Opened in 1892, the City Opera House closed in 1920 and didn’t reopen until 1940, when movies and other events failed to keep the theater in business, it closed again in 1945.

Reopened in 1988 by The City Opera House Heritage Association, the group raised half of its $8.5 million goal for the theater’s renovation. Film programming is also planned for the future.

The Opera House has hosted so much more than just the Film Festival. For our current campaign status (Over $7 Million!!!!), photos, events and construction news please visit us at www.cityoperahouse.org We look forward to another wonderful year of events and hope you can come enjoy our brand new Grand Entrance on Front Street. For the first time ever we now have full access for everyone and will have new seats in the balcony early 2007. Check out the website for musicals, festivals, operas and symphony events.

The City Opera House in Traverse City is listed in the 1897-98 edition of the Julius Cahn Official Theatrical Guide. Charles Wilhelm was the Mgr. and the seating capacity is listed as 1,114. Ticket prices ranged from 25 to 75 cents. The house had electric illumination. The proscenium opening was 36 feet wide X 20 feet high, and the stage was 25 feet deep. The theatre was on the second floor and there were 7 in the house orchestra. The 1897 population was 9,000 with an additional 8,000 in surrounding villages. Hotels were the Park Place, Hotel Whiting and Front Street House. There was one daily newspaper and 3 weeklies. Also listed in the Guide in Traverse City was Steinburg’s Grand Opera House which had 776 seats.