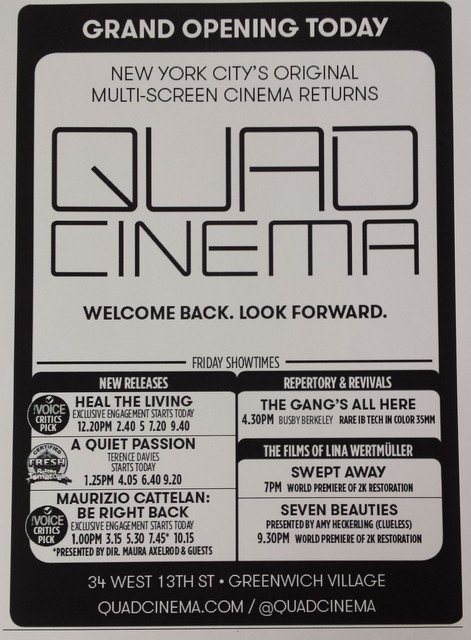 Opened on October 18, 1972, the 500-seat art house Quad Cinema was Manhattan’s first four-screen theatre and is now one of the oldest independent theaters in the city. It still remains a vibrant center for art house films.

Just saying the pandemic in general will be responsible for the closure of many theatres period. Local ordinances may also be too restrictive, such as New York’s, to overcome.

Has the Quad Cinema ever considered an “on-line streaming” program, like the Film Forum to bring in some much-needed funds?

Cohen Media Channel streams films. They own the lease on this location.

Please update previous owners: Golden and City Cinemas. Lesser Theatre Services is a film booking company and never own this theatre at all.

“A longtime supporter of the arts, Kanbar - who founded the Quad, the first multiplex movie house in New York - has donated more than $10 million to endow the Kanbar Institute of Undergraduate Film and Television at New York University.”

Maurice Kanbar, who died at age 93, finally had an obituary in The New York Times, published in the printed edition of Sunday, October 2nd. In addition to his building the Quad, Kanbar is also credited with numerous other innovations, including Skyy vodka, claimed to be a hang-over free product.

Photos of the Quad’s 2017 makeover can be found in an article in The Hollywood Reporter. View here