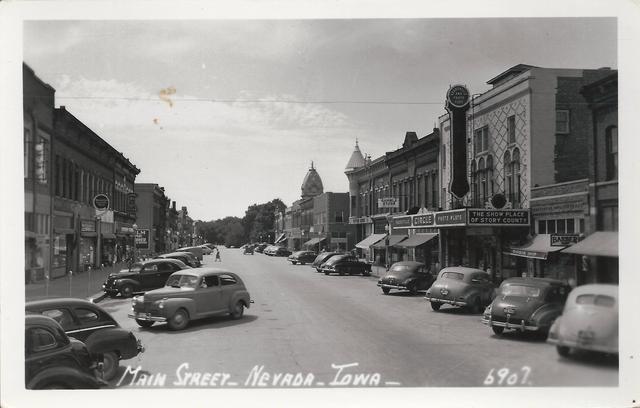 Opened October 17, 1928 as the Circle Theatre with 748 seats, the initial programming was photoplays and vaudeville. Later renamed Camelot Theatre, it was operated by Fridley Theatres chain and was a popular place to see second-run films.

Barely surviving as a discount house for decades, the theatre finally closed in March 2001, after a nearby multiplex lowered its ticket prices.

The Camelot Theatre reopened under new ownership in 2003 and showed first-run films. It seems to have closed by April 2013. It re-opened as a live performance venue known as the Talent Factory.

This theater has reopened as an independent theater 2 to 3 years ago. It is operated by the owner of a local funeral home. I have gone to several movies there and it is nice. It still has the night sky ceiling. While it still has discount prices, often it has first run movies in the first few weeks of opening or sometimes even on the nationwide release date! Also, local variety shows and fundraisers are performed on it’s Opera house-style stage. It’s current phone number is 515-382-2281.

wow, this doesn’t get updated very often!! haha. The camelot theatre in Nevada Ia is alive and well, it’s been up and running for the past four years, my family and I recently purchased the theatre and took possesion on december 1st of 06. we plan to keep it a theatre as long as we have the support of the community. It has right around 470 seats.

for a few pictures of the camelot i’ve taken since purchasing, you can even check show times!! haha go to www.myspace.com/bjbanks78

From the 1940s a photo of the Circle Theater before it became the Camelot.

The register of historic places states this theatre opened on 17 Oct 1928 and the architects were,Wetherell and Harrison,from Des Moines.

This place seems to be closed. The website link takes you to a Facebook page with no listings. The phone is disconnected.

We no longer show movies at the Camelot. The theater is now the home of The Talent Factory where we have live performances. The big screen and projector are still in working condition at the theater, but the cost is prohibitive as far as showing movies. Our website is www.iowatalentfactory.com if you would like to see what we are doing inside of this majestic, historical building.

Saw an interesting piece on Facebook. During a recent renovation they came upon a wallet that had been lodged in the floorboards. They figured it was there from 1944. Through some detective work they located the owner who was a teen at that time.

Here’s the link to the piece robboehm mentioned above.

8 | m a y 2 0 2 2, from Our Nevada published by the City of Nevada For years the Camelot Theater has stood as a landmark in Nevada’s downtown district. Since 1928, many in Nevada and surrounding communities have enjoyed coming to the historic theater to see feature films and live perfor- mances. This atmospheric movie palace with a ceiling of twinkling starlights and the impression that you were sitting in an outdoor courtyard made it a truly special entertainment destination for generations. A recently formed local group is committed to continuing this tradition. The Camelot Theater Foundation, a non- profit organization, formed to own, revitalize, and sus- tainably manage the historic Camelot Theater in Nevada, has completed the purchase of the theater building and equipment from The Iowa Talent Factory. With this mile- stone behind them, the group will soon announce details for a $2 million capital campaign to support renovation and expansion plans. “Community support for the Camelot Theater project has been tremendous,” said Melissa Sly, President of the Camelot Theater Foundation. “So many people have an emotional connection to this special place and want to see the theater continue to serve the community and thrive for years to come.” The first phase of renovation will focus on the building facade and marquee, as well as the two upstairs apart- ments that have not been occupied for decades. Future renovations will include reconfiguration of a portion of the theater seating and an expanded lobby with a bar and dining space. The work will commence as soon as fund- ing is secured. According to the National Trust for Historic Preservation, “Historic theaters are proven community revitalizers and economic drivers, they catalyze other big developments, create jobs and improve the local quality of life.” The so- cial, cultural, and economic role that the Camelot Theater fulfills will play an important part in the area’s downtown revitalization efforts and recovery from the pandemic. It is hoped that the renovated theater will promote the growth of existing downtown businesses and help attract new ones. After the renovations, the theater will have the flexibility to accommodate a variety of events. This will be a de- sirable venue for movies, live music, plays and musicals, children’s theater, educational events, business training, weddings, formals, birthday parties, and more. The Camelot Theater Foundation has been focusing on actions for securing the theater and renovations for about a year. Lingering effects of the pandemic have delayed the process, but the group will start its public fundraising efforts soon. The project has already received funds from a number of groups and individuals, includ- ing the City of Nevada, Nevada Economic Development Council, Burke Corporation, State Bank & Trust, South Story Bank, and more. The group has also applied for a number of grants from local, state, and federal sources and is awaiting the outcome of these. The capital fundraising campaign will include the op- portunity to sponsor a component of the renovations, including theater seats. “People who have special memo- ries and love for the Camelot will have the opportunity to have their name right on it,” Sly said. Details for the the- ater’s capital campaign will be released later this spring. The Iowa Talent Factory will continue to have live shows at the Camelot Theater during this process. Thanks to an interim lease agreement with this group, the theater operating costs will be covered during the fundraising campaign and throughout the majority of the repairs. Come to our Mix-N-Mingle on May 18 from 4-6 p.m. at the Camelot Theater, 1114 6th Street, to learn more about the capital campaign, renovation plans and volunteer opportunities. Find us on Facebook or email Melissa at camelottheaterfoundation@gma